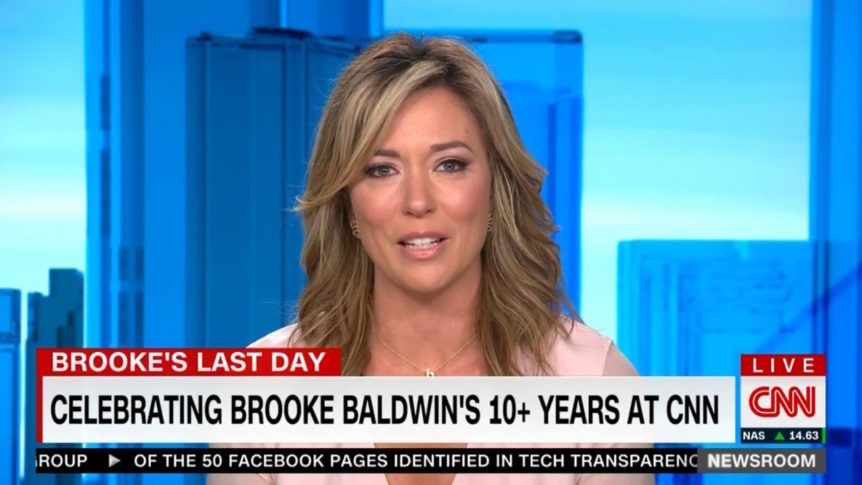 Baldwin, who first announced she was leaving CNN in February, has been the face of CNN Newsroom on weekday afternoons for a decade.

The end of the 3 p.m. hour of CNN Newsroom was dedicated to Baldwin’s 10+ years at CNN. Following a video montage of her career, an emotional Baldwin told the audience that the show was not originally supposed to be hers, and rather she was filling in for a week until a new anchor was found.

“Well guess what, I have kept this seat warm for nearly 11 years,” she said. “You and I have witnessed history together from marriage equality to this pandemic, from the Women’s March to Me Too, from natural disasters to, again, senseless shootings. And now we wait. We wait for the justice in a trial where another Black man in America has died at the hands of police. This job using, my voice for over a decade has been nothing short of a profound privilege.”

The Atlanta native first joined CNN in 2008 as a freelance correspondent before climbing the ranks to the anchor desk just three years later at the age of 31.

“So to you at home, thank you for trusting me. Thank you for holding me accountable. And thank you for all of the love,” she continued. “And to you. My CNN family, my CNN huddle. This is the hardest part. Thank you for making me better. Thank you for pushing me. Thank you for believing in me and my big backflip off the high dive today. You know, a decade ago, I didn’t even know the show would become mine. And now, a decade later, I find myself in a similar situation not totally knowing what’s next. And I’m okay with that. Because what I do know is that I am a journalist and a storyteller for life. And lastly, I’m leaving this place even better than I found it.”

Baldwin signed off referencing a line from U.S. Women’s National Team soccer player Megan Rapinoe, whom she recently interviewed for her book Huddle.

“She said it started with Mia Hamm and then Abby Wambach. And eventually it will be her fighting for what’s right, and fair and equal for the next generation of women’s soccer players. These women, when they left the team, they would urge the remaining players to leave the team better than they found it. And so here I am, in relating it to journalism,” said Baldwin. “When I saw all of those women recently, one after another after another, these White House Correspondents for TV and print standing up to ask President Biden questions at his very first press conference. Let me just say, I was sitting in my office, I was on my feet, cheering them on. So many women, Black, white, brown, progress. We do need diverse voices telling our stories, from in front of the camera and to the executive suites. We are making progress. So whatever industry you are, my parting words, get a little uncomfortable. Speak up and keep pushing.”

“I’m Brooke Baldwin here in New York. And I cannot wait to have you join me on our journey together,” she finished.

“I am a journalist and a storyteller for life.”

After more than a decade in the anchor chair, @BrookeBaldwin says goodbye to CNN, leaving viewers with one final message:

“Get a little uncomfortable,” she says, adding “speak up and keep pushing.” pic.twitter.com/1KQxx55m78

Brimming with love and gratitude as I sign off from @CNN for the last time.💗 pic.twitter.com/yMI69GRssJ

Other CNN anchors joined in on social media to say goodbye to Baldwin.

I have been friends with @BrookeBaldwin for more than a decade, so her departure from @CNN is bitter-sweet for me. From our lively New Years’ Eve parties to our fun dinner dates, it’s been a blast! Wishing you all the best from here. NYE won’t ever be the same. pic.twitter.com/0K86BNViyr

My good friend and colleague @BrookeBaldwin is wrapping up her wonderful years at @CNN today. We will miss her but we wish her only the very best as she embarks on her next adventure. And congrats to her for her timely new book “Huddle: How Women Unlock Their Collective Power.” pic.twitter.com/ds8PwVJETP