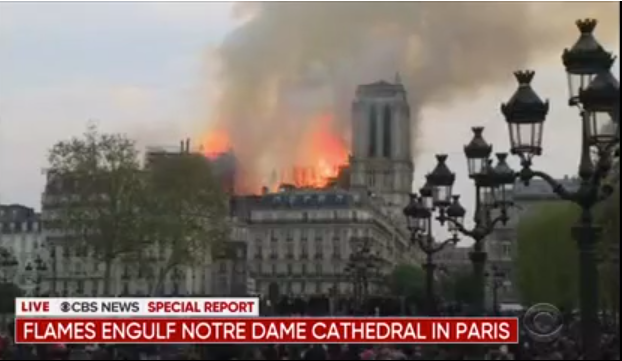 Before the news breaks, the Notre Dame is on fire. pic.twitter.com/fhSNcznCG2

As firefighters fought to contain the intensifying blaze, the structure’s legendary spire collapsed.

Good day from New York. We’re coming on the air with breaking news out of Paris where a massive fire has erupted at the Notre Dame Cathedral. Video shared on social media showed the roof engulfed in flames. That’s the scene early evening right now in Paris. This fire has been burning for at least an hour. Live picture on the left side. 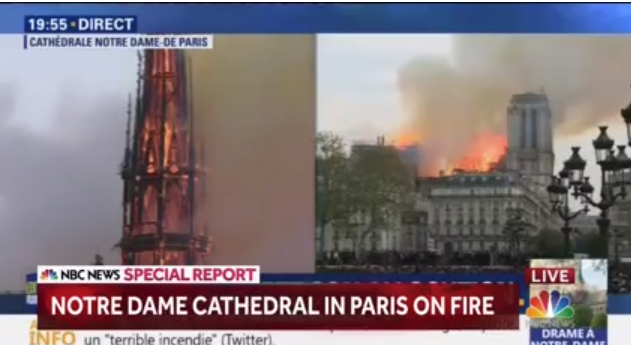 You can see a close-up of the spire fully engulfed in flames. The flames appear to be concentrated on the back side of the famed cathedral. One of the shots earlier revealed a number of scaffolding put in place, construction scaffolding around the site where the flames appeared to break out. At this hour, obviously, too early to name a cause. Different angles here, obviously, people sharing images via social media, that plume of smoke billowing away from the burning spire. There’s a long shot across from the city of Paris. you can see that fire is burning and putting a significant amount of smoke in the air. Of course, one of Europe’s most famous tourist attractions …

The fire is ravaging throughout the Cathedral of Notre Dame. We just learned from the firefighters on site that the spire, which is 96 meters high, has collapsed. This is extremely tragic, because Notre Dame is the most loved and the most visited monument in Paris. More visitors come here than the Eiffel Tower. Watching this fire rage in the last 30 minutes, 40 minutes and watching how it spreads is taking everyone by surprise.

Right now, we want to show you firefighters battling a massive blaze at this hour. One of the most iconic churches, really in the world. You’re looking at the the iconic Notre Dame Cathedral, where a fire broke out.

We have been watching these images playing out in our newsroom. Flames shooting from the base of the medieval spire. They’re about six hours ahead of us, New York time. about 8 p.m. in Paris.

Look at this: just a stunning image of that billowing smoke.

There had been construction at the church. Some sort of renovation under way for those of you who might have been lucky enough to travel to Paris recently. You would have been familiar with that scaffolding. Unclear if that spire was sparked by this construction. The flames are visible. Not just the smoke, the flames now engulf the iconic Notre Dame Cathedral in Paris. As you know, this comes amid high Holy Week. Easter just a week away. The flames literally lighting up the spire. There were witnesses on the ground who had reported pieces of debris, small embers in the air that were dropping on the people who had surrounded the Notre Dame Cathedral to watch this as it unfolded. People who weren’t even right there at the cathedral feeling the effects of this. I know emergency crews are on the scene to try to get people to safety because of those embers, those pieces of the church that have now become to fall from the sky in and around Paris.

It‘s 2:01 p.m. Eastern. You’re looking at live coverage of Paris at this hour. The Notre Dame Cathedral, one of the most iconic cathedrals in the world, in Paris, engulfed in flames at this hour. No word on what’s caused this fire …

Longtime ABC News foreign correspondent Terry Moran, who is now based in Washington, joined by phone:

It’s heartbreaking. It’s heartbreaking, David. Notre Dame is not just a church, it’s the heart of France. Really, it’s a place that is a testament of the history of France. In times of trouble, where they rally. Obviously, a place that’s built to the glory of God. This is tragedy not just for the people of France but for the people of, you know, of the Christian faith around the world. One of the great churches of the world. 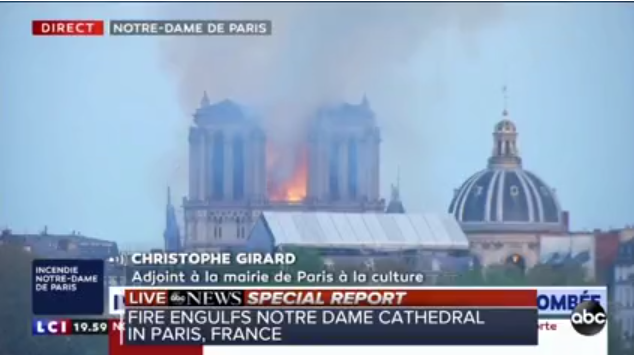 This is a CBS New Special Report. I’m Jeff Glor in New York and we are following an awful situation in Paris at this hour. The historic Notre Dame Cathedral is burning, the spire has collapsed. Flames burst through the roof just a short time ago. We’ve been watching this giant plume of smoke that can be seen all over Paris. The Notre Dame Cathedral was the 12th century—is the most visited—one of the most visited landmarks in Paris, millions of visits every year, and now those who are there today have been watching this scene unfold. Once again, the Notre Dame Cathedral on fire, part of it has collapsed in Paris at this hour. Elaine, what do we know?

CBS News Paris-based correspondent Elaine Cobbe called in from the City of Light to provide her insights.

Jeff, the fire took hold really rapidly. The first flames developed into a massive blaze. The wooden structure of the roof is what has it go down so quickly, and the steeple, the spire has just collapsed. There is 13th century wood in there and as well, the cathedral has been under renovation so a lot of materials and a lot of equipment relating to that in the church as well. There have been some suggestions that it may have contributed to the blaze. At this stage the firefighters say they do not know what caused it. They are trying to contain the fire, but at this stage it looks like the fire is winning … 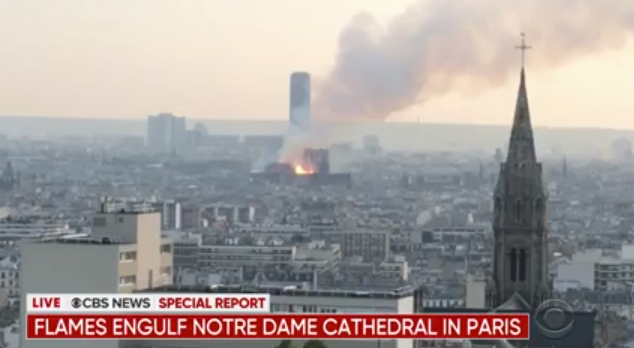 CBSN presented continued coverage of the fire, with an assist from its global newsgathering partner BBC. 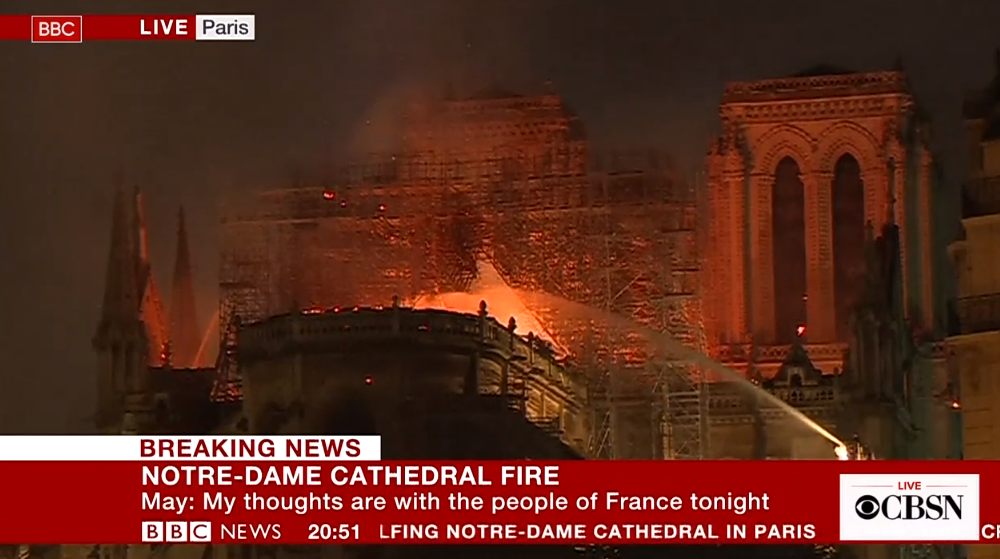