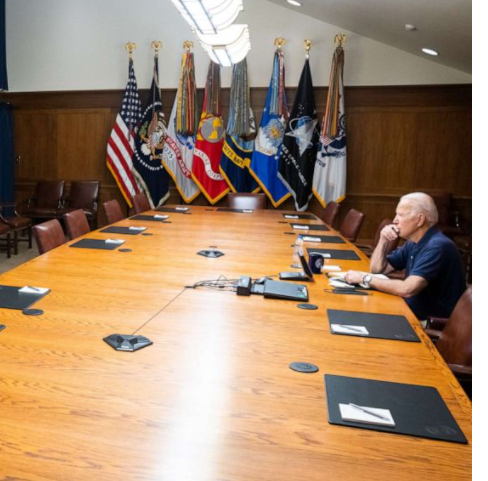 The broadcast networks are now scheduled to break into their regularly scheduled programming at 3:45 p.m. ET Monday to take President Biden’s remarks from the East Room on the crisis in Afghanistan. The president’s remarks come in light of the Taliban having seized control of the capital city of Kabul and the U.S. scrambling to evacuate diplomats and their families fearful of the organization.

There is footage showing chaos at the Kabul airport as native Afghans try to flee the Taliban. People clung to the sides of military planes, even as one taxied down the runway.

President Biden was expected to stay at Camp David on Monday. However, he will return to the White House today and address the nation about what has transpired.

I will be addressing the nation on Afghanistan at 3:45 PM ET today.

Senior White House officials seem to be taken aback by how quickly the Taliban took over the country after the U.S. announced it would be withdrawing its presence from the war-torn country.

“It’s certainly the case that the speed with which cities fell was much greater than anyone anticipated including the Afghans, including many of the analysts monitoring the situation,” White House national security adviser Jake Sullivan said Monday on Today show.

Deputy national security adviser Jon Finer said on MSNBC: “If you’re asking has the situation deteriorated in Afghanistan faster than was anticipated and expected not just by us, by the way, but broadly? I think the answer to that question is undeniably yes.”