NEXT:Anthony Scaramucci May Be Joining the Trump Administration Afterall
PREVIOUS:Why a 2013 Sean Hannity Tweet is Making the Rounds Today 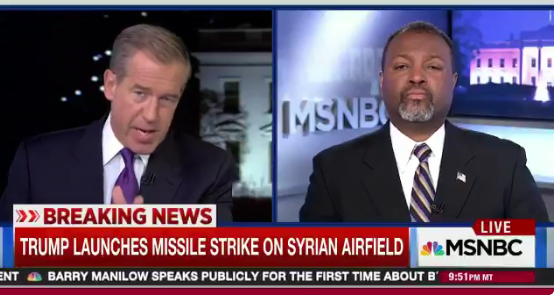 MSNBC’s breaking news anchor and 11th Hour host Brian Williams is facing criticism from the Twittersphere for comments he made during the network’s live coverage of the missile launch attack on a Syrian air base. The strikes were carried out following a chemical weapon attack supposedly ordered by the regime of Syrian President Bashar al-Assad.

“I am tempted to quote the great Leonard Cohen: ‘I am guided by the beauty of our weapons,’” Williams said during an interview with U.S. intelligence expert Malcolm Nance. “They are beautiful pictures of fearsome armaments making what is for them what is a brief flight over to this airfield.”

The comments were made while video provided by the Pentagon of Tomahawk missiles launched by U.S. warships towards the Syrian air base was being shown.

Some people deemed the comments as insensitive or perhaps as a bit too cavalier given the circumstances.

Jesus Christ — Brian Williams: “I’m guided by the beauty of our weapons” – You can support airstrike without glamorizing it. https://t.co/77tefLFt9g

This is truly a surreal segment. Brian Williams: “I am guided by the beauty of our weapons.” https://t.co/85TNZxkNa8

The saddest thing here is Brian Williams is probably not lying this time. He likely thinks missile strikes are beautiful. https://t.co/11XnE4EbjO

Nance, on the other hand, defended Williams’s comments:

I personally love @BWilliams. He has an extremely calming effect in serious crises. His statement was a quote of poetry which I have adopted https://t.co/M1AYotR1h9