NEXT:CBS News Denies Allegation That It 'Staged' Line of Cars at Covid-19 Testing Site to Make It Look Longer
PREVIOUS:Megyn Kelly Gets On-Camera Interview With Woman Who Accused Joe Biden of Sexually Assaulting Her in 1993 HOAX is based on two years of interviews with 250+ insiders. Here’s how the publisher describes it in a sentence: “The urgent and untold story of the collusion between Fox News and Donald Trump.”

A description of the book from Simon & Schuster’s website:

“At the center of the story lies Sean Hannity, a college dropout who, following the death of Fox News mastermind Roger Ailes, reigns supreme at the network that pays him $30 million a year. Stelter describes the raging tensions inside Fox between the Trump loyalists and the few remaining journalists. He reveals why former chief news anchor Shep Smith resigned in disgust in 2019; why a former anchor said “if I stay here I’ll get cancer;” and how Trump has exploited the leadership vacuum at the top to effectively seize control of the network. … Including never before reported details, Hoax exposes the media personalities who, though morally bankrupt, profit outrageously by promoting the President’s propaganda and radicalizing the American right. It is a book for anyone who reads the news and wonders: How did this happen?”

In Hoax, Stelter also examines Fox News’ coverage of Covid-19 from January through the spring as network personalities such as Hannity and others accused other news networks of playing up the threat of the virus in order to hurt Trump‘s reelection chances.

More from publisher Simon & Schuster: “In March, as the deadly virus spiraled out of control, Sean Hannity mocked ‘coronavirus hysteria’ as [the] ‘new hoax’ from the left. Millions of Americans took Hannity and Trump’s words as truth—until some of them started to get sick.”

Stelter, arguably Fox News’ most passionate critic at CNN, apparently inked a deal for the book last year. It was supposed to look at Trump’s roller coaster relationship with his go-to cable news network. But he decided to make the network’s coverage of the virus, which has been heavily criticized by Stelter and other media observers and journalists at rival networks, another significant part of the book. Stelter believes Fox’s coverage of the pandemic has played a significant role in the president’s decision-making process concerning the issue. 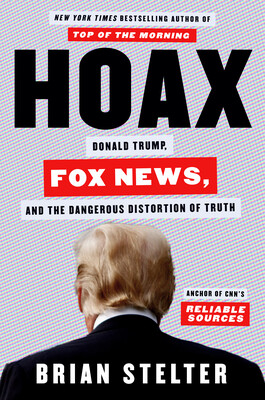