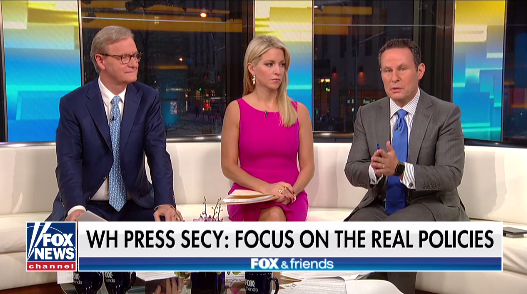 Fox & Friends co-host Brian Kilmeade is usually supportive of President Trump’s actions. A bit too supportive, some will argue. But there have been instances in the past when Kilmeade has been critical of the president, and that was true once again this morning on Fox & Friends.

Kilmeade criticized Trump for going after his former assistant Omarosa Manigault Newman via Twitter. He feels the Twitter attacks are only helping her book sales, and that “in many ways, Omarosa has outsmarted the president, who has taken the bait and gone out and directly tweeted at her, after the president came out and gave Michael Wolff millions of dollars by going after his book, he seems to be doing the same thing with Omarosa.”

Indeed, Unhinged: An Insider’s Account of the Trump White House has shot up Amazon and Barnes & Noble best-seller lists since those tweets. At publication time, it’s No. 1 on Amazon’s “Best Sellers in US Presidents” list.

After Kilmeade’s comments, Ainsley Earhardt accurately noted that the overwhelming majority of questions during yesterday’s briefing were focused on Omarosa, with far fewer about policy.

“Just a very quick one on something that Omarosa said today… She called the president unfit, mentally unfit for the office. As someone that has worked with her, how surprised are you at the level of her animus towards this president and the White House?”

Earlier in the briefing, Sanders called on Corke, who decided to cede his question back to NBC’s Kristen Welker. Classy move by the Fox Newser.

After the montage, Kilmeade said: “I just wish if the president had tweeted about Turkey and the legitimate national security interests around there, and the Christian pastor, and the Kurds and the electronic reverberations there…”

He then stated Pres. Trump should do “the Eminem thing,” and ignore her criticisms. Trump declined to criticize Eminem after the legendary rapper went after the president on Twitter.

Will Trump change his ways now that Kilmeade has suggested he do so? That remains to be seen…