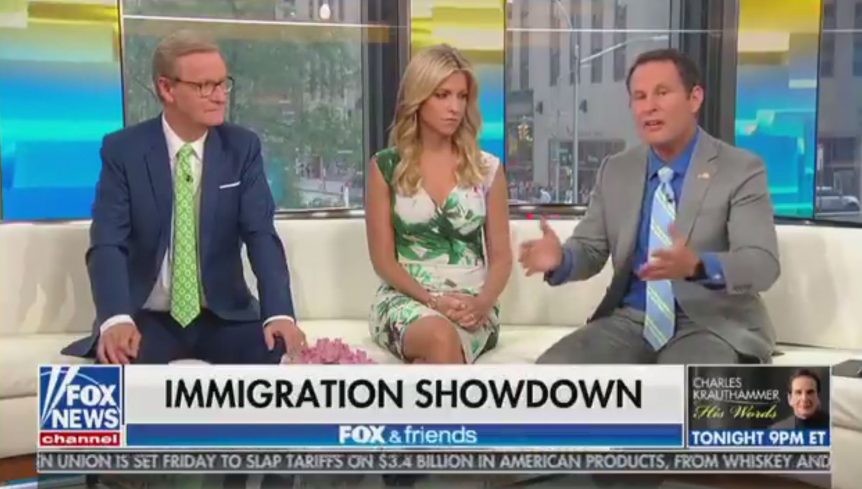 Fox News Channel host Brian Kilmeade is explaining a comment he made earlier on Fox & Friends.

In a discussion about family separation at the U.S.-Mexico border, Kilmeade said, “These are not … like it or not, these aren’t our kids. Show them compassion, but it’s not like [President Trump] is doing this to the people of Idaho or Texas. These are people from another country.”

“Of course I didn’t mean to make it seem like children coming into the U.S. illegally are less important because they live in another country,” Kilmeade said later. “I have compassion for all children, especially for all the kids separated from their parents right now. Nobody wants to see children in these circumstances and glad they are on their way to being reunited with their parents.”

A couple hours later on her MSNBC show, Stephanie Ruhle went after Kilmeade, saying, “I want to point something out to our colleagues over at Fox & Friends. I don’t think there’s anyone who is saying a life of a child in Idaho or Iowa means less than someone on the other side of the border. And if you are so worried about how every American child is treated, think about the money that is being blown, spent, flushed down a toilet for this political theater. If you want to address income inequality, take the tens of millions of dollars going to this self-created crisis, and put it toward income inequality, put Wi-Fi in rural areas, workforce development programs, improving the education system.

This is noise and nonsense, and a crisis created by the president. So please, with your propaganda, that anyone is putting the life of a migrant child ahead of the life of an American child is simply nonsense. It’s ignorant. It’s stupid. It’s wrong.”

Here’s what Kilmeade said this morning:

.@kilmeade on children who have been split from their parents as a result of Trump administration policy: “Like it or not, these are not our kids. Show them compassion, but it’s not like he’s doing this to the people of Idaho or Texas. These are people from another country.” pic.twitter.com/s24zwyDfNc