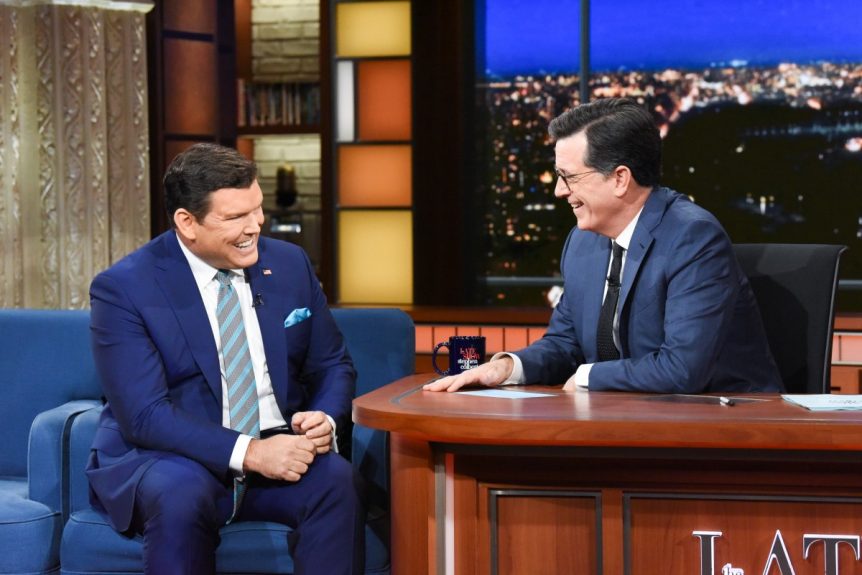 You may recall that Fox News chief political anchor Bret Baier, his wife and two boys were in an awful car accident late last month in Montana that put them in the hospital.

The accident left them “banged up, but alive.”

Thankfully all are OK.

Baier was supposed to appear on CBS’ The Late Show with Stephen Colbert the following evening, but obviously had to cancel. The Fox Newser alerted The Late Show as to why he needed to cancel, which led Colbert to then break the news on his show, which is live-to-tape in the early evening.

“Bret Baier was supposed to be here tomorrow night,” said Colbert. “We just found out that he and his family were in a car accident in Montana, and bad, like, jaws of life to get him out of there. They’re all in the hospital, but they’re gonna be OK. We just want to say: We hope you’re doing better.”

Baier appeared on the program yesterday evening, and provided Colbert and his audience with the details of the accident:

“We were coming back from a ski trip and I was driving and it was pure ice. We were about a mile from the airport, slipped through an intersection, got hit by a pickup truck, turned and flipped…Two kids, my wife, airbags go off, windshield breaks. Good Samaritan stops – Zach Black, thank you Zach. Gets us out of passenger side….First responders were unbelievable. Montana Highway Patrol, EMS. We got away with a concussion, sprained ankle, 14 stitches on a chin, and my eight-year-old lost a tooth, but he’s a hockey player, so he really likes that. He looks like [Washington Capitals player Alexander] Ovechkin .”

Baier then credited Colbert and the reach of The Late Show. It’s how so many people learned of the accident.

“But I will tell you that I realized the reach of your show in the next day…thousands of people emailed or texted. I had people from grammar school saying, ‘Are you in a coma?” I’m like ‘If I was, I don’t know how I’m going to get back to you.” So if I didn’t answer, everybody is okay, we are very blessed, thank God, please wear your seatbelts and thanks to the first responders.”

Baier and Colbert also talked about 10 years of Baier serving as anchor of Special Report, as well as President Trump’s State of the Union address.