NEXT:As Fox News Turns 25, Sean Hannity and Other Personalities Reflect on What the Network Means to Them
PREVIOUS:NBCUniversal News Group Has Found Its New Head of Communications 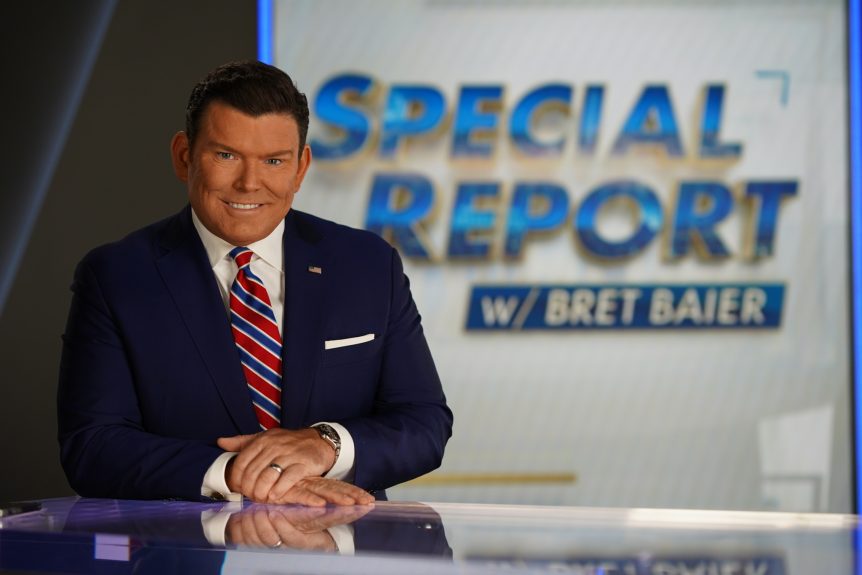 Fox News Channel launched 25 years ago today, Oct. 7, 1996. To mark the milestone anniversary, we spoke with one of the network’s longest-tenured on-air personalities, Bret Baier.

Here’s what the Special Report anchor had to tell us about his 23 years at the network, and how both Fox News and his 6 p.m. program have evolved over time.

TVNewser: Bret, you joined Fox News in 1998, launching the network’s Atlanta bureau from your apartment. As someone who has been at Fox for 23 of its 25 years in existence, how has the network evolved?

Baier: I think it has just become bigger, and obviously more platforms. There are eight different platforms now, with digital and podcasts and everything else. So, the reach has expanded exponentially. But, inherently, like how we operate, it’s basically the same.

I took over for Brit Hume [as host of Fox News’ Special Report] in January 2009, and built on the show that he started. We really haven’t changed our stripes. As far as how it looks, it’s different and there’s new technology, but it’s the same reporting. Brit told me when I took over that’s what it is — the news drives the show. So from my perspective, that’s been roughly the same. But, the channel has has increased in size, and scope, and frankly, influence.

How is Special Report different now from when you took the reins from Brit Hume?

It’s a lot more interactive. Social media plays a part and the digital component plays a part with our synergy with FoxNews.com. But, I think the show itself is roughly the same structure. Half of the show is sort of like a traditional network newscast, and then the back end, we have panelists who have covered Washington for decades reacting or analyzing the news of the day. So, it’s the same format. I think it’s changed in the bells and whistles, and the look over the years has changed a little bit. We just have a new studio now that we’re just trying out all the different little gadgets. It’s a better viewer experience just by what we can put on the screen, but substantively, I think it’s the same show.

With so many hosts cycling around the hours, what do you attribute the stability of your show to?

As far as my show, it’s a really great place for me. It feels like a good fit. They’ve empowered the news side, invested in us, and kind of given me the leeway to run a show that at the end of the hour, I’m asking the question: “Did we cover everything that people need to know?” We’ve been blessed. We’ve just tried to put together a fair newscast every night.

Do you see your program as a competitor to the evening newscasts?

Sure, they’re competitors. I’m not looking at the competition that much, I’m focused on 6-7 p.m. But, I think that we most resemble a network newscast in how we stack the show and put it together. When Pew Research does a study of evening newscasts, we’re in that same genre. It’s a different animal because we have our analysis section at the end, but for the most part, we’re covering a lot of the same stories, but choice of stories is another way that we try to be fair on all sides.

What’s a signature moment for you over your time at the network? Is it 9/11, or is there another moment you can pinpoint for us?

9/11 was a major point for everyone. For me, it obviously changed the trajectory of what I was doing. I went from Atlanta to covering the Pentagon and then never left. So, that started my time in D.C.

I think covering the White House and interviewing presidents, it always sticks with you, but I think the most important thing that changed me was the time that I spent with troops in war; in Afghanistan, in Iraq, and seeing the service and sacrifice that not only they were giving that their families were giving back home. I can remember being in a forward operating base in Afghanistan and filing a story, and the guy next to me, a sergeant, was meeting his baby for the first time over the initial Skype. Mom’s crying, he’s crying, I’m crying. You realize those moments are big and gives you a perspective 20 years later after leaving Afghanistan about what we did there.

Is there anything else you’d like to do, professionally, whether it’s at Fox Corp. or elsewhere? I’m aware you’re a big sports guy.

Well, I’ve been writing books. I have another book coming out on Oct. 12. Digging into history, that’s been a fun thing for me. I like doing long-form stuff and Fox has enabled me to do that. More hour-long specials, kind of focusing on one topic. But who knows? Down the road, I could be a golf announcer or something!