NEXT:Investigation Into Alleged Harassment at CBS News 'Is Expected to Return Its Conclusions This Month'
PREVIOUS:Scoreboard: Thursday, Aug. 2 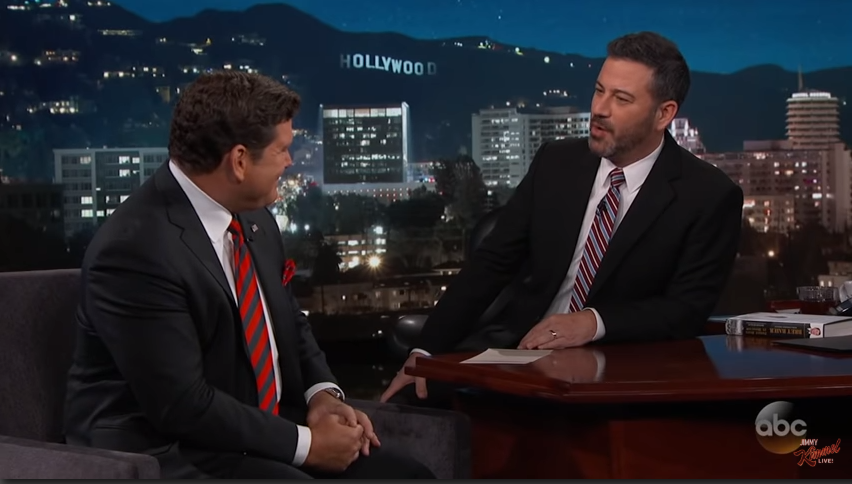 Fox News anchor Bret Baier and ABC’s Jimmy Kimmel have a good deal in common. Among their commonalities are that they both have young sons who have experienced significant medical problems, and they both are passionate about a free press.

Baier flew across the country for an appearance on Jimmy Kimmel Live last night, where the anchor and the late night host discussed President Trump’s TV viewing habits, outside criticisms of Fox News, his book Three Days in Moscow: Ronald Reagan and the Fall of the Soviet Empire and Baier’s statement expressing support for CNN after the White House excluded White House correspondent Kaitlan Collins from covering an event in the Rose Garden.

As a member of the White House Press pool- @FoxNews stands firmly with @CNN on this issue and the issue of access https://t.co/TFwfLQtP9h

The discussion started with Kimmel thanking Baier for the kind email he sent after his son Billy had heart surgery.

Kimmel: It’s great to have you here, and I want to thank you because after my son’s heart surgery, when the Fox News community was attacking me, you sent me a very nice email. I know your son had a heart surgery as well. How is your son doing?

Baier: He’s doing great. Well first of all, I wanted to reach out because I’m a father who went through the same thing. And I sat in those hospital rooms listening to beeps and I wanted to reach out to you and say there’s a light at the end of the tunnel. Our son Paul went through three open heart surgeries, nine angioplasties. He’s doing awesome. And I know Billy’s going to do the same.

Then the Special Report clip from earlier this month of Baier expressing support for CNN was shown, and his comments garnered significant applause from the studio audience.

Kimmel: I found it reassuring to see journalists sticking together, even though you’re competitors and not exactly on the same page from a network standpoint; but I found it to be reassuring.

Baier: It was a no brainer. You know, I’m on the news side of the house and you have to stand for access. This is a credentialed person. You know I wrote a book about Reagan. Sam Donaldson was yelling questions they didn’t like in the Reagan White House either, but he was never denied access. And to Fox News’ credit, they stood up right away. I mean it was instantaneous. We put up the chain, it happened, and then I got it on the show with the approval of Fox management. So Jay Wallace put out a statement, our president and it was a no brainer.

Kimmel: Has anything like that ever happened before while you were working in news?

Baier: Yes. In fact, when the Obama White House 2009, I had just taken over for Brit Hume as anchor, and they tried to deny Fox News a round-robin interview and CNN stood up and Jake Tapper said if Fox is not doing it we’re not doing it. And so, being a member of the White House press pool is something and I think we need to always stand for that.

When asked by Kimmel if he would like “to split Fox News into ‘news’ and opinion’ so that you are all not lumped together,” Baier remarked that Fox News “is one team, but two different businesses entirely,” and while he and the opinion programming are quite different, he asked Kimmel to “watch my show three times, send me an email, and let me know if we’re being fair.”