NEXT:Bill Weir Brings GBS to HLN
PREVIOUS:New WarnerMedia Chief on Jeff Zucker: 'He Is Here for the Ride Going Forward, I'm Pleased and Excited About It' 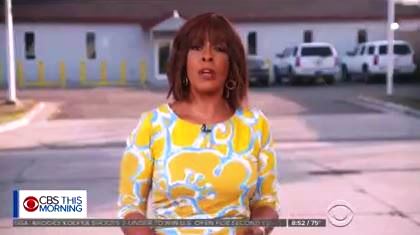 Following a weekend of protests, administration push-back, an op-ed from a former first lady and a statement from the current first lady, attention to the Trump administration’s zero tolerance policy that separates children from their illegal border-crossing parents shows no sign of letting up.

Last week several TV news reporters, including NBC’s Jacob Soboroff and ABC’s Tom Llamas, got a look inside one of the detention facilities which is housed in a former Walmart. But over the weekend images of some detainees, including children, in cages brought a new angle for reporters to cover.

CBS This Morning’s Gayle King reported from Texas this morning (just a few feet from Soboroff’s Today show position) where she reported on the border patrol taking exception to the use of the word “cages.”

This just in from @davidbegnaud: Border Patrol has reached out to @cbsthismorning and said they are "very uncomfortable" with the use of the word cages. They say it's not inaccurate and added that they may be cages but people are not being treated like animals. pic.twitter.com/0zSDqJszgK

The issue has been a hot topic on cable news too with two of President Trump’s supporters saying the policy should be changed. Former White House communications director Anthony Scaramucci told CNN’s New Day the policy is “inhumane. It’s offensive to the average American.”

On Fox & Friends, Alan Dershowitz called on Trump “to end this policy.”

“The president has the authority to stop it,” said Dershowitz. “He can, this morning, after watching this show, no more separating parents and children.”