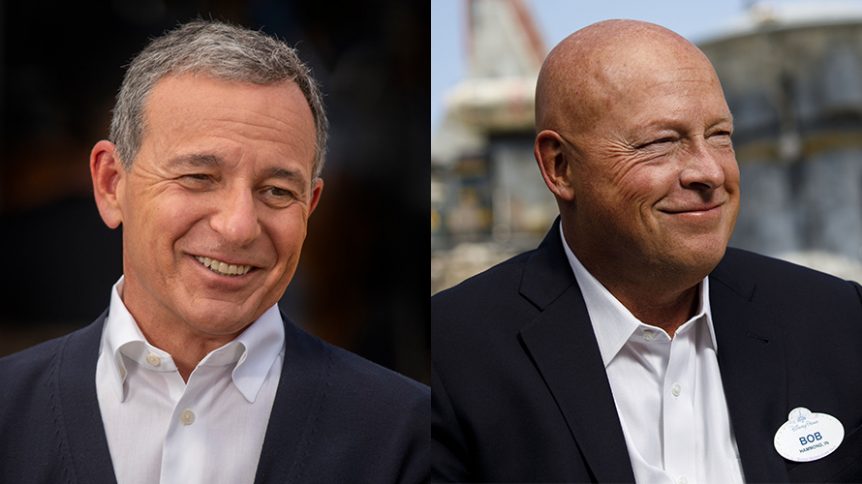 The Walt Disney Company, which owns ABC, ABC News and ESPN, has selected Disney Parks, Experiences and Products chief Bob Chapek to succeed Bob Iger as the company’s chief executive, effective immediately. Iger is stepping down from the CEO role, but will stay on as executive chairman through the end of his contract on Dec. 31, 2021.

Adweek’s Kelsey Sutton reports that in Iger’s new role, he will direct Disney’s creative endeavors and lead the Disney board through the end of his contract on Dec. 31, 2021. Chapek will report to Iger in the new company structure.

This succession has been a long time coming. The initial plan was for Iger to step down as CEO in 2015, at which time he would become executive chairman of the board. That didn’t work out and he ended up being extended through June 30, 2018. However, in March 2017, Disney announced that it was extending Iger’s term to July 2, 2019, and said he would serve as a consultant for the following 3 years. In Dec. 2017, Disney extended Iger’s contract through 2021.

Fast forward to Feb. 2020, and the board believes it has finally found the best replacement for Iger in Chapek, a 27-year veteran of Disney who has served as chairman of the Parks, Experiences and Products division since 2018.

Iger, who once had ambitions of being on-air himself, joined ABC in 1974, rose through the ranks and was named Disney CEO in 2005, succeeding Michael Eisner.

He is a television business legend, guiding Walt Disney Co. through an extraordinary era of transformation, highlighted by the $71.3 billion deal with 21st Century Fox that has proved to be an industry game-changer. In the landmark deal, which was finalized in March, 2019, The Walt Disney Company gained control of Fox’s movie and TV studios, cable networks like FX and National Geographic, India’s Star network and Fox’s 30% stake in Hulu, while Fox, still run by the Murdochs, transformed into a more slimmed-down broadcast TV company focusing on live news and sports, and is now named Fox Corporation.

Iger has a strong connection to television news too. He is husband to Willow Bay, the celebrated television news journalist whose credits include co-anchor of ABC’s Good Morning America Sunday, correspondent for NBC’s Today show, CNN anchor, and co-host of NBA Inside Stuff. Bay was also named dean of the USC Annenberg School for Communication and Journalism in March 2017.