NEXT:Fox News Apologizes for Showing Infographic 'Without Full Context' of How the Market Jumped After Outrage Over Murders of Black Men
PREVIOUS:Fox News CEO Suzanne Scott Shares Thoughtful Advice on Becoming the Boss 'You Want (and Don’t) Want to Be' 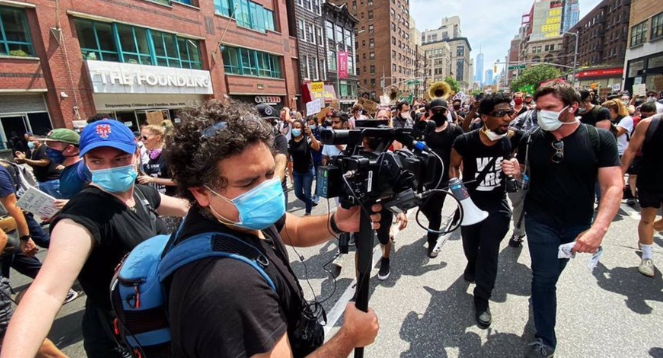 The coverage of protests against police brutality sparked by the murder of George Floyd has been mostly negative. However, there was at least one nice TV news-related moment to come out of Saturday’s protests.

“We have to fight apathy more than anything. We have to fight for black lives. Right now, if we don’t do that, nobody will. We are the ones,” musician @JonBatiste tells @BillWeirCNN during a protest in New York City. https://t.co/PDKZtJanfI pic.twitter.com/IydZKFTNfW

As you can see from the video above, it was a bit of a chaotic situation, and Weir’s cameraman Eveilo had to navigate through the chaos.

All of a sudden, a woman sporting a Mets cap came to the rescue, as you can see below. Only later would she introduce herself as Fox & Friends booking producer Bridget Gleason.

Was doing a protest walk and talk with @JonBatiste when the woman in the Mets cap came out of the crowd to watch my cameraman Evelio’s back.
A few miles later she introduced herself and said “I work for @foxandfriends but we’re all on the same team today, right?” pic.twitter.com/3avVoLuYny

A nice gesture by Gleason that Weir and his team appreciated.