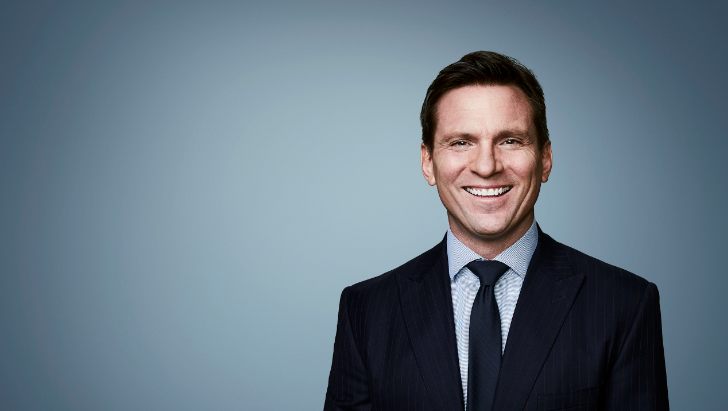 Bill Weir wants you to know that his CNN special report: Woodstock at 50 doesn’t use the words “Donald” or “Trump” in the entire hour.

You’ll see POTUS in one fleeting shot, but that’s it.

CNN’s resident renaissance man is excited about his one-hour special marking the 50th anniversary of Woodstock, which debuts Saturday at 9 p.m. ET, and provides a strong pitch for why you should be excited and tune in too.

“The reason we care about Woodstock is the same reason why you get chills when you give a stranger directions. It’s human connection,” Weir told TVNewser by phone on Thursday. “It’s the idea that we can take care of each other when the fences go down and there are no metal detectors. And there are different characters – from David Crosby to Graham Nash to John Fogerty, to the couple that was on the cover of the Woodstock triple album who are still together, married 48 years. There are these little lessons in that which we should think about.”

The veteran TV newser also tells us about his new role as CNN’s chief climate correspondent, how TV news can better cover climate, and whether a return to a climate-controlled studio is in his future.

TVNewser: Talk about your special, Woodstock at 50– from idea generation all the way to the present.

Weir: So, [CNN vp of programming] Jim Murphy who runs the specials unit, knows I’m a music nerd. And I covered the 40th anniversary of Woodstock for ABC when we were both there. He asked me, “Would you do an hour on Woodstock? And I said, “Absolutely, but I don’t want to do just the same sort of nostalgic trip, hear the same stories. You know, I want to look at it like, ‘What’s the real legacy of all those hippies in that field talking about peace, love and music?'” Because in the 60s there was a lot of class warfare, and racial tension. And I wondered if they failed in that mission or did they help change the world? Did they plant the seed for [Barack] Obama and #MeToo, and Green New Deal?

The great thing about this story is there was one event, but there were 400,000 stories. And more than that for all the ones who saw the traffic jam and walked home – I just wonder what is it that out of all the concerts for this one to get the golden anniversary? And it’s less about the music, because we argue as to whether [Jimi] Hendrix was sublime or whether it was horrible. But it’s really about a blast of humanitarianism in the middle of a cold civil war that feels like we’re kind of back there again in the way we deal with each other. So I wonder could a Woodstock happen? Could a rural, conservative, war supporting farmer — is there someone like a [Woodstock founder] Max Yasgur in 2019 who would give his fields to a bunch of Jay-Z fans? And so we also follow Michael Lang, who was one of the original organizers. We follow his quest to do 50, all the twists and turns in small town politics, which is just such an ironic and sort of poetic episode of history repeating itself. Only this time, the times have changed so much.

So, we look at how the music festival industry is part of a $31 billion behemoth industry industrial complex. We go to Bonnaroo and try to tie those threads together, figure out what this generation even thinks of Woodstock, whether they think protest music can change the world, whether they think,  Fyre Festival is the new indicator of how our values have changed as opposed to grandma and grandpa smoking weed in the mud. I just tried to meet as many people who are there and, and I got to play John Fogerty’s guitar and hang out with David Crosby.

You are now CNN’s chief climate correspondent. Tell me what that title means to you, and also how TV news can improve on its coverage of climate.

Great questions. Well, I like being a journalist. I like doing hours about Woodstock. I like being given a blank slate, like The Wonder List, and a passport and an expense account and going and finding great stories. I’ve always sort of resisted being pigeonholed into a beat, but I absolutely believe with all my heart that this is THE beat. It encompasses every aspect of our lives, not just from what we drive, but what we need, how we build, how we move around the country, that we protect each other against disasters. It’s about psychology and sociology and history. And when I do The Wonder List, those sort of stories thrilled me, most of all the ability to find one bartender in the South Pacific and explain coral bleaching through his story.

[CNN Worldwide president] Jeff Zucker at the beginning of the year said, “I think climate is it’s own beat. We’ve reached that stage in this conversation.” And I was absolutely thrilled to hear that. I think any reporter wants to do stories that comfort the afflicted and afflict the comfortable on the largest possible scale. And this is as big as it gets.

So, we’ll figure out ways to work my storytelling into the weekly mix on a much more consistent basis, while I’m also on the road shooting long form documentaries. I’ve got one in the works right now. I was just in Iowa. I spent a week there, a dozen farmers and even formed three and a half minute piece, but I got way more traction online and went farther then a lot of other things. It was sort of the quality over quantity model. So I want to wrap that up.

What my colleagues in newsrooms everywhere who want to tell this story are frustrated by is just that the viewer’s not wired to think about 50-year threats. They’ll say, “Tell me about the hurricane that’s coming on Saturday, and I’m in.”  We’ve got too much immediate concern in our lives to think about -as much as we love them- to think about our children or grandchildren’s generations. But I think the story has accelerated now because people are feeling it and it’s no longer a distant theoretical crisis. I have covered three 500-year storms in Texas in the space of a year. I was in Key Largo for Hurricane Irma and Puerto Rico for Hurricane Maria. And these are human stories.

I was in Iowa and did a story about how hard it’s going to be on farmers and how hard it is on farmers, and I got a DM (Twitter direct message) from a local woman there who teaches FFA classes – Future Farmers of America- and says how utterly depressing it is for these 12 and 13-year-olds to think about their futures.

And for that generation, to the kids who are camped out in front of the U.N. every Friday, to them, it’s like the house is on fire, but mom and dad are having another cup of coffee.

So, I think that newsrooms would be well-informed to hear the youngest voices on this because they have the most to lose. And to think and to think about every story, whether it’s a recycling story or a food quality story or a, a heat death warning, we’re all part of this same beat now whether we like it or not.

You’ve been at CNN for nearly six years now. You were primarily in a climate-controlled studio at ABC, but now spend most of your time at CNN out in the field. Any desire to return to the desk? Has that come up in conversations with management at all?

I think that’s always in the conversation. But for me, honestly, if I had to choose, I would stay out in the world. My favorite sound is the seat belt sign going off in a new country. As much as I love the thrill of the red light coming on in the studio and sitting down with interesting guests, that’s a whole different skill set that I love doing and I’m probably will do again when I’m too old to climb steps to the plane. I love what I’m doing now.

The bug I got for this sort of work came at ABC when one Earth Day, I think it was 2007, we did a two-hour prime time special. We had a correspondent live on every continent. I was underwater on the Great Barrier Reef and Diane Sawyer had them turn out the lights in Times Square as this symbol of how we’ve turned a corner. and then Bear Stearns collapsed and we stopped talking about it again, until now. But I think this time it’s different.

You hosted the live limited series [Border Live] for Discovery last year. Did you enjoy that experience? Is a gig like that something you’d be interested in again?

No, no. That was a failed experiment launched with good intentions. At the time I thought that conversation about what’s really happening on the border from both sides, from law enforcement and from the migrant side was vital because I had covered the caravan. I thought that’s what Discovery was looking for, and that was what I was told it would be. But in the end, I think the production company in charge just didn’t — it’s like doing live news with seven remotes, in order to call it Border Live. I refuse to call anything that was on tape “live,” and they wanted it to be as urgent as possible. But it just wasn’t a great fit.

Tell me about your local news years and how you have transferred that experience to what you’re doing now at CNN.

When you are in a studio and midtown Manhattan, you can only speak for the guy in the Heartland with so much authenticity. But, if you’re a local reporter in Green Bay, it is much more courageous to cover your community and expose it, warts and all, and see those people at church and at the grocery store. I think that’s the beauty in the power of local news. I’m such a huge advocate because most viewers they pick their anchor team, and if you’re in a good market, they’re there with you at breakfast and at bedtime for life. So the responsibility in those communities is huge. But in the age of corporate pressures and sort of homogenized idealistic stuff that’s going on at Sinclair, it’s really tough for them because you can’t tell the boss, “I’m not going to read this,” or “I’m not gonna cover this this way.” When you’re just thinking about the mortgage payments. It’s really difficult.

I keep an eye on that world with keen interest and I’m rooting all the people I worked with back in local.