NEXT:Scoreboard: Wednesday, Sept. 27
PREVIOUS:Beyond Covering the Crisis In Puerto Rico, Some TV Newsers Are Helping Those Most In Need Bill O’Reilly had agreed to go on CNN’s Michael Smerconish to promote his new book, but Smerconish said on his radio shot yesterday that won’t be happening afterall.

“Bill O’Reilly called me yesterday, and although complimentary toward me personally, regarding me as a straight shooter and so on and so forth, said that because of his history with [CNN], he just wasn’t comfortable in coming on, at least not at this time,” Smerconish said.

Last month, when Smerconish appeared on O’Reilly’s web show No Spin News, O’Reilly told him, “I’ll see you on CNN in September.”

“There’s a lot of ground that I would have liked to have covered with him. But that’s not going to happen. At least, not now,” Smerconish said.

O’Reilly got a retweet on his big ratings from Pres. Trump: 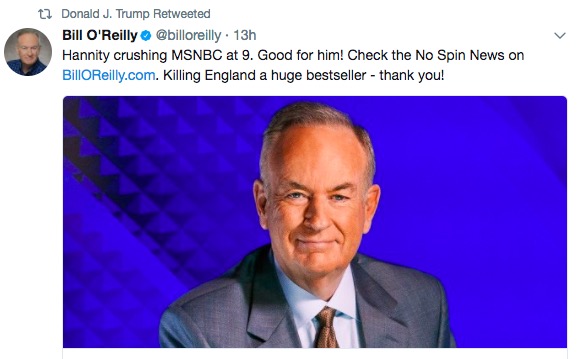