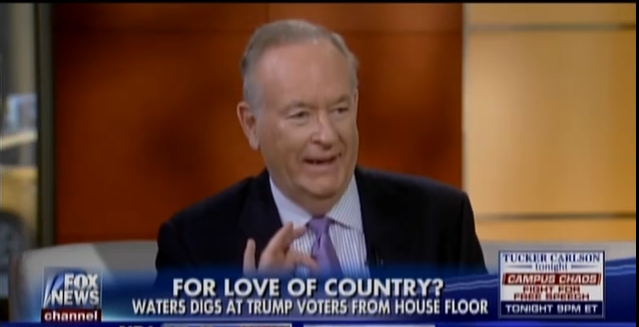 Fox & Friends spent multiple blocks during this morning’s broadcast criticizing comments made by Rep. Maxine Waters (D-CA) yesterday on the floor of Congress.

The program showed 40-seconds of her speech during the 6 a.m. hour, where she said:

“We have suffered discrimination, we have suffered isolation, and undermining, but we stand up for America, oftentimes when others who think they’re more patriotic, who say they are more patriotic do not,” Waters proclaimed. “When we fight against this president, and we point out how dangerous he is for this society and for this country, we’re fighting for the democracy. We’re fighting for America. We’re saying to those who say they’re patriotic but they turn a blind eye to the destruction that he is about to cause this country: ‘You’re not nearly as patriotic as we are.'”

Rep. Waters has been perhaps the most outspoken critic of Pres. Trump and his administration in Congress. She referred to them as “The Kremlin Clan” on MSNBC last month.

Bill O’Reilly appeared in studio at around the 8:30 a.m. mark of the broadcast, in part to promote his book. The program replayed footage of Waters’ speech for O’Reilly. After its completion, he quipped: “I didn’t hear a word she said, I was looking at the James Brown Wig.”

O’Reilly seemed to backtrack slightly after his original comment, claiming: “I didn’t say she wasn’t attractive.”

“Her hair is pretty,” Earhardt responded.

“I love James Brown, but it’s the same hair, James Brown — the ‘Godfather of Soul’ — had,” O’Reilly said.

O’Reilly continued: “She’s a sincere individual, whatever she says she believes. She’s not a phony, and that’s old school. I’ll give you a break here, I love you Maxine. I want to see you on The Factor, and when hell freezes over, I’m sure that will happen.”

A Fox News spokesperson tells TVNewser that O’Reilly will address the comment on his program this evening.

UPDATE: A written statement from O’Reilly:

“As I have said many times, I respect Congresswoman Maxine Waters for being sincere in her beliefs. I said that again today on Fox & Friends calling her ‘old school.’ Unfortunately, I also made a jest about her hair which was dumb. I apologize.”