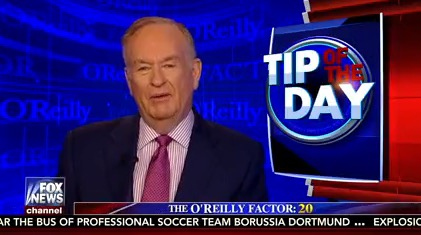 On his show Monday, Bill O’Reilly laid the groundwork that he’d be going on vacation. “I like to take time off around Easter, it’s calming,” he said.

Last night, in his Tip of the Day, he told viewers he’s going on a trip that he booked “last fall.”

“I booked a trip that should be terrific, not going to tell you where it is, but we have a contest on billoreilly.com. Guess where Bill is going?,” O’Reilly teased.

Following his show, New York Magazine’s Gabe Sherman published a story, not on where O’Reilly is going, but that he might not return to Fox:

According to four network sources, there’s talk inside Fox News that tonight’s show could be his last. Lawyers for the law firm Paul, Weiss, hired last summer by 21st Century Fox to investigate Roger Ailes, are currently doing a “deep dive” investigation into O’Reilly’s behavior. They’re focused now on sexual harassment claims by O’Reilly guest Wendy Walsh after she reported her claims via the company’s anonymous hotline.

Fox News disputes that saying, “O’Reilly is on a pre-planned vacation and he will return on April 24th.”

There is history here. In 2009, then-Fox News host Glenn Beck took some time off as the criticism to his comments about Pres. Obama began to grow. Insiders claimed it was a forced vacation. Beck denied that. He stayed with Fox News for 2 more years.