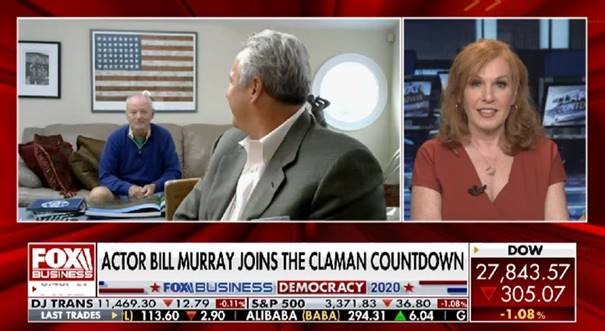 Iconic actor Bill Murray made an unexpected appearance on the Fox Business show The Liz Claman Countdown earlier this afternoon.

While Fox News contributor Robert Wolf was doing a live hit from his home on Martha’s Vineyard—from where he recently hosted a fundraiser for former vp Joe Biden—a second guest could be seen in the background, just hanging out, reading some literature and looking toward the monitor once every so often.

WOLF: By the way, was I told this friend of mine that I’m going to be on with you and he loves you. So he decided to come by. I think he really wants to promote his new Apple TV show on Fox Business. … Here’s this guy who was my caddie yesterday playing golf. He’s a pretty good caddie. So Bill wanted to say hello.

CLAMAN: Hi, Bill. Good to see you. Welcome to Fox Business. I like the sweater. Is he wearing shorts?

WOLF: See, he was on the golf course … and I’m doing this. But we want to make sure we talk about Biden.

CLAMAN: Well, Bill, I think you should debate, you should moderate the next presidential debate. I think that way we could actually get some answers on some serious stuff from both candidates. Right. Thumbs up?

MURRAY: Probably after a couple cups of coffee I think I could do it.

CLAMAN: All right. Well, welcome, Bill. And please feel free to chime in at any point. All right. Let’s just get right to what’s going on at the moment. President Trump has just made the announcement via a tweet storm, Robert. I don’t know if you heard this, that no stimulus. He doesn’t want to have stimulus talks until after the election. Do you think that Joe Biden is going to now drill down on what he feels is necessary and how will that square with undecided voters?

WOLF: Yeah, I think it makes a lot of sense right now that Joe Biden leans in. His “Build Back Better” plan. If you look at what Moody’s Analytics said in the research center, they both said they would add more jobs, less debt, higher wages. Actually, the Moody’s Center said it would add 18 million jobs, seven more million than Trump. And the truth is, this recovery, I know that the administration keeps calling it a super V-shaped one. But you and I have chatted. It’s more of a K shape. You have the haves who are doing incredibly well. The top 10 percent of the country. And you have the have nots with small businesses closing continually and the gap between white males and black and brown communities gapping. And we’re just in a situation where we need more stimulus. So the idea that he can’t make a deal, he supposedly the art of the deal is just mind boggling to me.

CLAMAN: How is Joe Biden’s plan going to raise wages? I have looked at everything that’s been happening and, you know, President Barack Obama had improved certainly the economy after the disastrous 2008 financial crisis. And it took a while. Then he handed that baton to President Trump, who continued to run with it. We had a very strong labor market and an economy that appeared to be humming along. But wages overall, and I’m talking over the past couple of decades, have not kept pace with the cost of housing, the cost of healthcare or the cost of education. We need to get wages up. What’s the plan?

WOLF: What is, unfortunately, in this country, the most bipartisan thing … everyone agrees on, the right, left, unions, Chamber of Commerce, the center, is the need for infrastructure, and infrastructure actually is the fastest multiplier of GDP and it’s actually the best for wages. There are high paying jobs there, not minimum jobs, high paying. And so if you look at Joe Biden’s plan, like two trillion of his plan focuses on infrastructure and clean energy, and these are private sector jobs. So it looks at not just roads and bridges and water system, but new type of infrastructure, battery charging stations, new electricity grid, next generation, GPS … And then the second part of his phase is the manufacturing center and sector. And that’s where, you know, literally you’re going to be taxed if you offshore and you’re going to get tax credits if you onshore. Those are the ways we build real jobs that are sustainable.

CLAMAN: Well, tax credits get big businesses very excited. One last question, you know, capital gains. Of course, when you sell the stock at a profit, you’ve got to pay capital gains tax. Traditionally, that’s lower. And I know Bill Murray probably owns a few stocks here and there. And he’d like to cash in and not be taxed too much, or maybe he would.

WOLF: Well, we know he owns Apple stock because he’s got his new movie on it coming out.

MURRAY: … I don’t buy anything. People just give me gifts, presents.

WOLF: Liz, I know you have been on this capital gains thing, but I just want to clear some facts. One, it’s capital gains going up for those that make an income over a million. Number two, capital gains … it’s not like people turn around and make different investments. That’s not where we’re building small businesses. Let’s recall: 87% of the stock market is owned by 10 percent of the highest earners. We’ve seen in consumer and consumer spending that they haven’t changed the habits. They’re making more money. So we need to make sure that we get … that this trickle down that’s not working changes. Do we start trickling up? We have to make sure that the base of our monthly got is the ones making money, and that’s small businesses. And under this administration, one in six are closing on a daily basis.