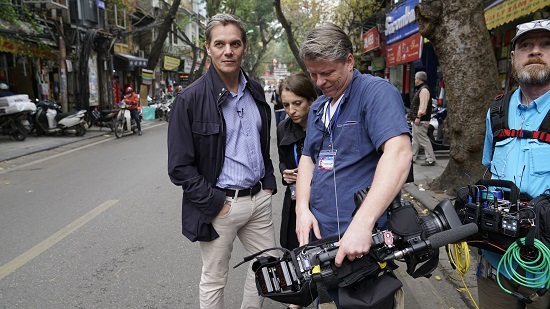 Bill Hemmer‘s road to national TV news is a unique one. In the early ’90s, he was a young sports anchor at WCPO-TV, the CBS affiliate in his native Cincinnati when all of a sudden he abruptly put his rising TV news career on hold, and decided to backpack around the world.

Not a choice many 20-somethings make.

Hemmer would go on to backpack for nearly a year—traveling through China, India, Nepal, the Middle East, Vietnam and various parts of Europe. He documented his trip throughout South and Southeast Asia, writing reports and submitting tapes for WCPO, as well as for The Cincinnati Post. All of these pieces were eventually combined into what would later be called “Bill’s Excellent Adventure.”

That “Excellent Adventure” fetched him two regional Emmys, and a job at CNN in Atlanta in 1995.

Hemmer left CNN for Fox News in 2005, and fast forward to 2019, he is the veteran co-anchor of America’s Newsroom, and now back in Vietnam for the first time in 25 years.

We managed to catch up with Hemmer on Tuesday. Here’s what he had to tell us about Vietnam in the year 2019.

TVNewser: It sounds like you jumped at the opportunity to head back to Vietnam. Tell us about the initial discussions you had with your bosses regarding this assignment, and why Vietnam is a place that means so much to you. I’d imagine it brings back memories of your “Excellent Adventure.”

Hemmer: The discussions, frankly, did not take long. Jay Wallace, the president of Fox News, got the schedule from Washington and sketched out our coverage within days. When I came through here 25 years ago, I was lucky because Vietnam had just altered some of its local laws on ownership of cafes and hotels. Independent travelers were no longer required to book through the state-owned tourist agency. This was a great opportunity. I worked my way through the entire country—Ho Chi Minh City in the south, up through Danang, Hue and into Hanoi—using local buses and trains on my own. Hanoi had a different look then—mostly low-lying buildings and tree-lined streets—but today West Hanoi has exploded. It is a sprawling town with new hotels, housing and a lot more traffic.

Sure, climate-controlled studios are nice, but you made a name for yourself out in the field and I know you enjoy being there. Can we expect to see you reporting from the field more frequently going forward?

When it works for the show and the story, absolutely. We did a similar thing in Helsinki last July for the Trump-Putin Summit. So when it is right, we’ll do it.

I think the last time we spoke, back in June, you and Sandra [Smith] had just been given another hour of America’s Newsroom. How has the show evolved since that time?

Sandra is terrific. We have developed a great relationship and that is so important when you are balancing three hours of coverage each day. This news cycle has shown an unquenchable thirst and we walk into that hurricane of coverage together every morning.

I know the president has already sat down with Sean. Will you be getting some time with him as well?

The request is always out there.

Yes, it’s a business trip first and foremost, but hopefully you’re getting a bit of time for sight-seeing. Tell us some of the interesting places you’ve checked out.

We had a chance to tour the city the day we arrived. Vietnam has been growing at nearly 7 percent for several years. Yes, a lot has changed, but the single biggest difference is not in their roads, or buildings, or a government policy. The biggest difference is that every driver on every motor scooter in Hanoi carries a smartphone in their pocket. They have access to nearly everything we do.  In a Communist-ruled country, that is a modern day revolution.