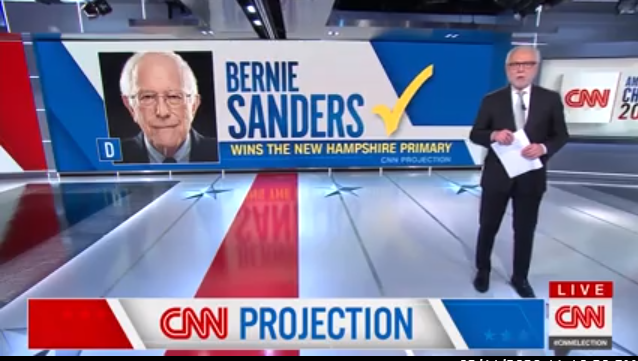 It was a rather late night and a close race, but when it was all said and done, Vermont senator Bernie Sanders won the 2020 New Hampshire Democratic primary, defeating South Bend, Ind., Mayor Pete Buttigieg by about 1.5%.

Fox News was the first cable newser to project that Sen. Sanders would win the New Hampshire primary, doing so at 11:14 p.m. ET. CNN called the primary in Sanders’ favor at 11:16 p.m. ET, right after he finished remarks to his supporters. MSNBC projected Sanders won the primary right before 11 p.m. ET.

Which candidates gave their remarks when?

First off, Andrew Yang had a poor showing this evening, and announced at 8 p.m. ET that he was suspending his campaign for president. 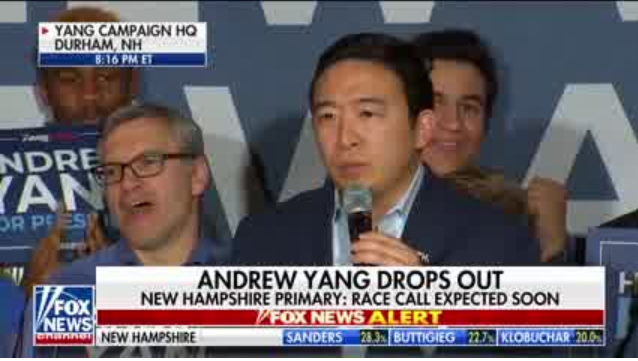 Colorado senator Michael Bennet did the same not long after.

With her 4th place finish seemingly solidified, Sen. Warren spoke to her supporters in New Hampshire on the early side, around 8:30 p.m. ET.

Joe Biden spoke to his South Carolina supporters beginning at 9:25 p.m. ET, with his disappointing 5th place finish in the bag. Dr. Jill Biden spoke first before giving way to her husband.

Unlike with Warren, CNN and MSNBC took the first few minutes of Biden’s remarks live.

“It ain’t over man, we’re just getting started,” Biden proclaimed.

However, Fox News’ Chris Wallace during his network’s coverage, remarked:

“And for him [Joe Biden] to say ‘it’s just the beginning’ – I guess it was the Yogi Berra line ‘It’s getting late early here.’ And it is because he was selling electability. He doesn’t have a great, dramatic agenda. He obviously isn’t Barack Obama or Jack Kennedy with a new face on the scene. He was selling tried and true and electable. And it appears he is going to be none of those things at the end of tonight if the results go the way they do. I think he’s really in serious trouble.”

Klobuchar appeared on stage to deliver remarks to her New Hampshire supporters beginning at 9:40 p.m. ET. CNN, MSNBC and FBN (very briefly) were among those to take her remarks live.

Buttigieg took the stage at 10:50 p.m. ET, and his remarks were taken by all of the cable newsers.

“I admired Senator Sanders back in high school. I respect him greatly to this day, and I congratulate him on his strong showing tonight,” said Buttigieg, who lost to the Vermont Senator by just under 2%.

.@PeteButtigieg is speaking congratulating @BernieSanders @SenAmyKlobuchar and all the other candidates after a remarkable finish too close to officially call but broad range across a coalition of voters: Democrats, Independents and Buttigieg says some newly former Republicans.

Lastly, Sen. Sanders took the stage at 11:07 p.m. ET to thank his supporters. During those 10-minute remarks, he proclaimed victory, doing so with 87% vote in and a 1.7% lead over Buttigieg.

“What I can tell you with absolute certainty, and I think I speak for everyone of the Democratic candidate is that matter who wins -and we certainly hope it’s going to be us- we’re going to unite together and defeat the most dangerous president in the modern history of this country.”

As mentioned earlier, CNN and MSNBC projected the primary for Sen. Sanders just seconds after he ended those remarks (11:16 p.m. ET).

On the broadcast news front, NBC broke into its regularly scheduled programming towards the end of the 10 p.m. ET hour with a Special Report, anchored by Lester Holt with analysis from Chuck Todd. They spent more time in that hour on primary coverage than CBS and ABC.

CBS News entered its regular programming with a two-minute-long Special Report, beginning at 10:57 p.m. ET, with Norah O’Donnell proclaiming the New Hampshire primary “is too close to call.” Major Garrett joined O’Donnell for the quick report.

ABC stuck with the series premiere of For Life in the 10 p.m. ET hour. ABC News broke in with a two-minute Special Report beginning at 11 p.m, anchored by George Stephanopoulos.

At 8 p.m. ET that night, when New Hampshire polling places closed, all of the cable newsers made two immediate projections: Sanders won on the Democratic side, and Trump wins among the Republicans. All of the network projections happened within seconds of each other.

This was a very different type of 2020 New Hampshire primary.