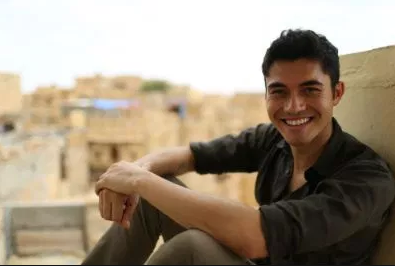 The highly-anticipated film Crazy Rich Asians hit theaters this week. It’s an important film for a number of reasons, most notably because it’s the first major Hollywood studio film to feature an all-Asian cast since The Joy Luck Club hit the big screen in 1993, and it’s directed, written and portrayed by Asians and Asian Americans. This is a population that’s severely underrepresented on TV and film in the U.S.

But it’s also notable from a TV news perspective because one of the stars of the film is Henry Golding, a BBC World Newser and host of The Travel Show, which debuted in 2014 and airs Sundays on BBC World News and BBC 2.

Prior to his BBC News and Crazy Rich Asians gigs, Golding – a renaissance man – was a hairdresser and hosted a weekly soccer program on ESPN; so he’s a former sports newser as well.

Golding’s father is from England and his mother is from Malaysia, and he grew up going back and forth between the two nations. He is presently based in Singapore and Malaysia.

Crazy Rich Asians is based on the novel by Singaporean author Kevin Kwan, and the story follows an American-born Chinese economics professor Rachel Chu (played by Constance Wu, the star of the ABC series Fresh Off the Boat) and her Chinese-Singaporean boyfriend (played by Golding) as they travel to meet the boyfriend’s “crazy rich” family in Singapore. The family initially doesn’t approve of Rachel because she’s a poor girl from a mainland Chinese single mother household who immigrated to the U.S. The couple has to stand their ground against the disapproving family.

I’ve yet to see it, but I plan on checking it out this weekend!