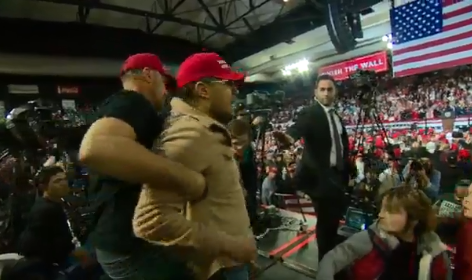 Update: 4:45 p.m. ET: White House press secretary Sarah Sanders released the following statement in regard to last night’s events:  “President Trump condemns all acts of violence against any individual or group of people – including members of the press. We ask that anyone attending an event do so in a peaceful and respectful manner.”

The BBC’s North America editor Paul Danahar has written to White House Press Secretary Sarah Sanders urging her and her colleagues to review the security that they have in place for the media at the President’s rallies.

Danahar pointed out that access into the media area last night was unsupervised and that no member of law enforcement or security stopped the attacker entering, intervened when he began his attack or followed up on the incident with our colleagues afterwards.

Last night, BBC cameraman Ron Skeans was shoved to the ground during President Trump’s rally in El Paso, Texas, a major city on the U.S.-Mexico border.

Skeans’ colleague, BBC Washington news editor Eleanor Montague was on hand to report what transpired. There’s video footage of the incident showing the BBC camera focused on Trump, when the focus suddenly jolts toward the floor. A man in a red hat is then seen/heard swearing in the direction of the news crews as he is being dragged away by another man in a red hat (presumably a MAGA hat).

Just attended my first ⁦@realDonaldTrump⁩ rally where my colleague BBC cameraman Rob Skeans was attacked by a Trump supporter. The crowd had been whipped up into a frenzy against the media by Trump and other speakers all night #TrumpElPaso pic.twitter.com/Oiw8osPms3

The crowd then started chanting “CNN sucks!” as Skeans was being dragged away.

President Trump likes to pump up the crowd at his rallies by creating a foil. That foil is usually the news media. He refers to coverage of him and his administration as “fake news,” pointing to the back of the arena where cameras are set up, while also referring to the press as “the enemy of the American people.”

In response, rally participants sometimes yell at members of the press who are on site to cover these events. That’s not new. But last night, one participant seemed to take it to the next level.

A BBC spokesman provided TVNewser the following statement, which notes that the president checked that all was OK.

BBC cameraman Ron Skeans was violently pushed and shoved by a member of the crowd while covering a President Trump rally in Texas last night. The man was removed by security and Rob is fine. The President could see the incident and checked with us that all was ok.

It is clearly unacceptable for any of our staff to be attacked for doing their job.