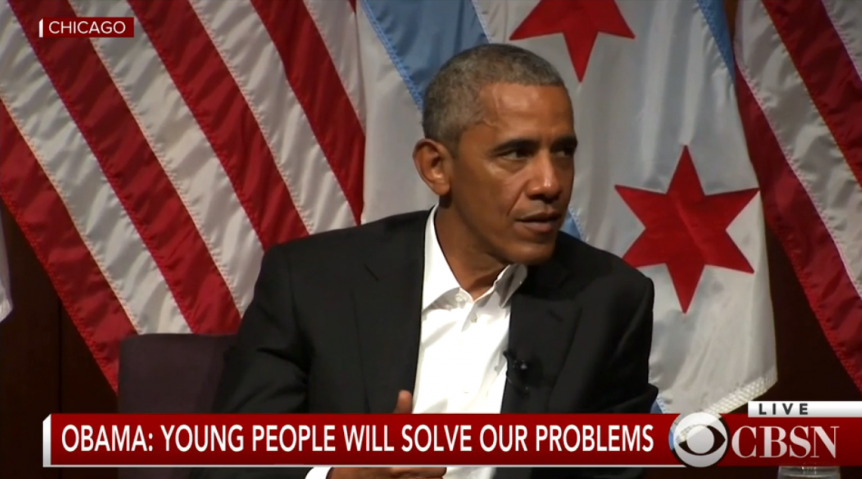 Barack Obama returned to the public stage this morning for the first time since leaving office. The 44th president appeared at a student forum at the University of Chicago, a school where he once taught constitutional law. The panel included young people from a variety of backgrounds, ethnically and politically. There was a mix of high schoolers, undergrads and grad students all from the Chicago area.

The former president’s team described the forum as a “conversation on community organizing and civic engagement” and a part of Obama’s goal to “encourage and support the next generation of leaders.”

Obama gave about a ten-minute monologue to open the forum, which kicked off a couple minutes after Noon ET. He did not mention Pres. Trump during that time.

The 44th president made a brief mention of the current media landscape during his opening remarks saying, “because of changes in the media, we now have a situation in which everybody’s listening to people who already agree with them and are further and further reinforcing their own realities to the neglect of a common reality that allows us to have a healthy debate, and then try to find common ground and actually move solutions forward.”

CNN, MSNBC, Fox News, and CBSN were some of the national TV news outlets that carried the event.

Fox News left after Obama’s opening remarks, and before the student panel started. The network went to its panel program Outnumbered for the remainder of the 12 p.m. ET hour.

CBSN left the forum to carry Pres. Trump’s remarks during his lunch with the UN Security Council ambassadors, but would return to the forum shortly thereafter for a solid 20 minutes or so.

CNN stuck with the forum until about 12:51 p.m. ET, before going Inside Politics with John King, where a panel discussed their observations of the event.

MSNBC moved to a split screen at around 12:54 p.m. ET, with Kristen Welker hosting the coverage and new MSNBC analyst (and former Obama press secretary) Josh Earnest serving as a notable participant in the conversation. Chris Jansing took over anchor duties during the 1 p.m. hour.