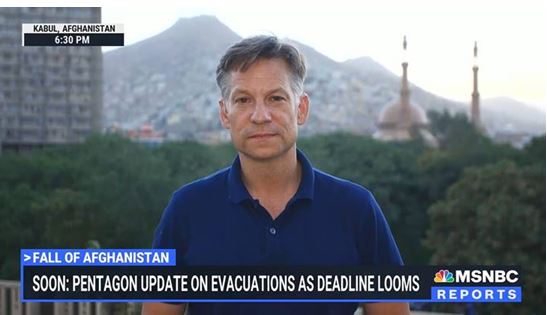 For MSNBC, there was good and there was, well, not-so-good. The good: MSNBC finished No. 2 during primetime across all of cable television (ahead of No. 6 CNN and only behind Fox News). During total day, MSNBC also averaged the second-most total viewers of any basic cable network for the 6th consecutive month.

The not-so-good: MSNBC saw audience losses in each key daypart and audience category from the previous month, and once again finished behind CNN in the key A25-54 demographic.

Compared to July 2021, MSNBC shed -6% in average total primetime viewers and -3% in the key demo.  The network also shed -5% in total day viewers and -7% in the total day demo. It seems MSNBC viewers weren’t quite as interested in the Afghanistan conflict, and the network in general this month.

Compared to the year-ago month (Aug. 2020). MSNBC shed -44% of its average primetime audience, -54% of its primetime demo, -41% in total day viewers and half of its total day demo (-50%). To be fair, Aug. 2020 featured coverage of the Democratic National Convention, an event which gave MSNBC its largest average primetime August audience ever.

Yet, as previously mentioned, the aforementioned shows (with the exception of Rachel Maddow) couldn’t out-perform CNN when it came to adults 25-54.

MSNBC PRIME TOPS CNN ACROSS TOTAL VIEWERS AND A25-54, FINISHES #2 IN ALL OF CABLE TELEVISION IN AUGUST FOR THE 6TH STRAIGHT MONTH

“Morning Joe” is #2 Among All Cable Networks, Dominates CNN for the 78th Month in a Row

NEW YORK (August 31, 2021) – In August, MSNBC prime (M-F 8pm-11pm) topped CNN across both total viewers and A25-54, according to Nielsen. MSNBC’s coverage and analysis during prime finished #2 across all of cable television (ahead of #6 CNN).

Early fringe programming (M-F 5pm-8pm) also dominated CNN among total viewers with 1.2M vs. CNN’s 817K and ranked #2 in the time period among all cable networks. In A25-54, MSNBC averaged 154K viewers.

MSNBC has held the #1 position in the Politics Sub-Category for 29 consecutive months in both video views and total minutes, according to Comscore through July 2021. From January to July, MSNBC monthly unique visitors are up +13% year-over-year compared with the same time period in 2020. Since January, MSNBC averaged 134M monthly video views in 2021, far outpacing CNN Politics (59M) and FOX News Politics (17M). MSNBC video viewers have watched for an average 36 minutes in 2021, +99% longer than CNN Politics and more than double Fox News Politics. In addition, the last four months have been MSNBC Daily’s best on record, surpassing election month, with August on track to be one of its top months ever.

NOTE: August ratings are based on Nielsen most current data day for 07/26/2021-08/29/2021. Individual show data for the month represents regular programming only, excluding specials and breaking news.