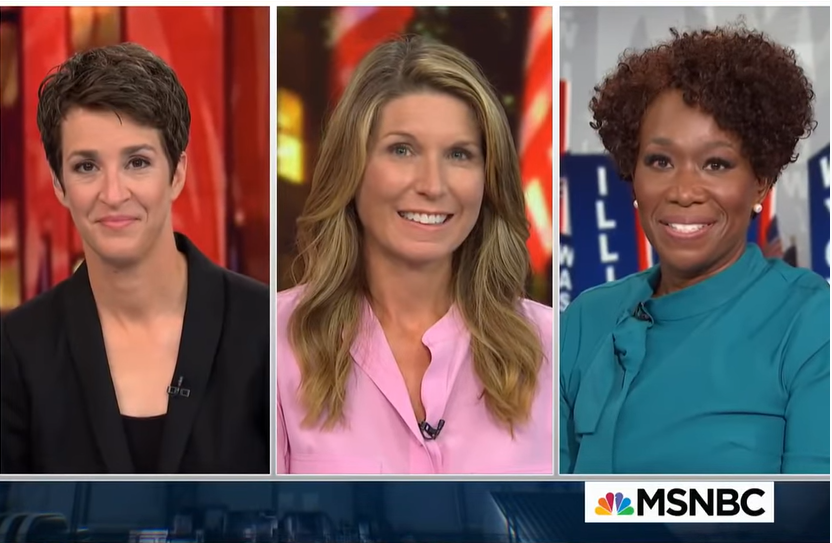 Similar to its competition, MSNBC had a superb month, ratings-wise.

MSNBC also averaged more viewers for its 2020 Democratic National Convention coverage than any other network, broadcast or cable, and delivered the network’s highest-rated week ever in prime time, the week of Aug. 17, 2020. While CNN remained No. 1 in the demo for this year’s DNC, MSNBC captured more viewers overall.

How did MSNBC trend compared with other relevant months? Relative to its average viewership for July 2020, the network was +5% in total prime-time viewers, +19% in the prime-time demo, +4% in total day viewers and +11% in total day demo in August 2020.

Compared with its average viewership for the year-ago month (August 2019), MSNBC was way up this past month. Having a Democratic National Convention to televise will usually do that. MSNBC was +48% in total prime-time viewers, +61% in the prime-time demo, +43% in total day viewers and +51% in total day demo.

MSNBC averaged more total viewers than CNN in most hours for August; though the story was different as far as adults 25-54 goes.

The ReidOut scored the highest-rated month ever in total viewers for the 7 p.m. hour in MSNBC history, and averaged more total viewers than Erin Burnett Outfront. That said, it finished No. 3 in its hour behind The Story with Martha MacCallum and Outfront in the key A25-54 demo, despite averaging the network’s largest 7 p.m. demo delivery since April 2018 (317,000). The ReidOut launched on MSNBC July 20, 2020.

MSNBC Was #1 Across All of Television in Prime for 2020 Democratic National Convention, Delivers Highest-Rated Week Ever in Prime

NEW YORK (September 1, 2020) – MSNBC’s special coverage and analysis during the month of August drove MSNBC to #2 in all of cable with double-digit year-over-year growth, according to Nielsen. Total day (M-Su 6am-6am), dayside (M-F 9am-5pm) and prime (M-Su 8pm-11pm) all beat CNN in total viewers and total day grew more than FOX News compared to August 2019.

MSNBC was the most-watched network across all of television in total viewers for the 2020 Democratic National Convention (Aug. 17-Aug. 20), sweeping each night during prime (8pm-11pm), delivering the network’s highest-rated week ever in prime, and unseating CNN as the most-watched network during the Democratic National Convention, according to Nielsen. MSNBC drew a record 4.9M average during the four nights of coverage in prime dominating  all competitors by at least 700K viewers (vs. FOX News’ 3.6M, CNN’s 4.2M).  Where all networks competed head-to-head (10-11pm), MSNBC’s 5.9M delivery among total viewers led ABC News’ 2.6M, CBS News’ 2M as well as CNN 5.3M and Fox News 2.4M.  MSNBC was the only cable news network to gain vs the 2016 DNC (10-11pm), +26%, while CNN (-20%) and FOX News (-19%) were both down.

NOTE: August ratings are based on Nielsen most current data day for 07/27/2020-08/30/2020. Individual show data for the month represents regular programming only, excluding specials and breaking news.