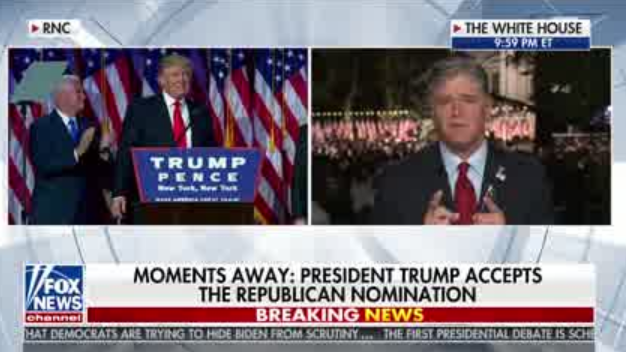 According to Nielsen live-plus-same-day data, Fox News just wrapped up its most-watched August ever, and Sean Hannity was the most-watched host on cable news, with his eponymous program averaging 4.7 million  total viewers and 850,000 adults 25-54

Fellow prime-time shows Tucker Carlson Tonight (4.4 million viewers) and The Ingraham Angle (3.3 million viewers) also benefited greatly from the RNC coverage, though each program was having a big ratings month even prior to the August conventions.

Fox News is home to the month’s four most-watched shows, with The Five and the aforementioned The Ingraham Angle following Hannity and Carlson.

MSNBC’s The Rachel Maddow Show, Fox News’ Special Report with Bret Baier, The Story With Martha MacCallum, The Last Word with Lawrence O’Donnell, The 11th Hour With Brian Williams and All In With Chris Hayes rounded out the 10 most-watched cable news shows for August. That’s six from Fox News and four from MSNBC.

The 11th Hour was the most-watched cable news show in the 11 p.m. hour for the second consecutive month. This, after playing second fiddle to Fox News for most of 2020. Fox News @ Night with Shannon Bream, however, remains No. 1 in adults 25-54.

Speaking of competitive cable news hours, MSNBC’s Nicolle Wallace (Deadline:White House) was once again the most-watched host in the 4 p.m. hour. CNN’s Jake Tapper (The Lead) took first place in that hour among Adults 25-54, with 326,000.

Wallace was given a second hour earlier this month (5 p.m.), but couldn’t move past The Five in that time slot. Deadline: White House split second-place honors with The Situation Room With Wolf Blitzer.

Cuomo Prime Time was CNN’s most-watched show of the month, averaging 1.4 million viewers at 9 p.m. (No. 21 overall). That’s noticeably down from the 1.87 million that tuned in to the show on average last month. The show finished No. 13 in total viewers last month.

Despite the drop in average total audience, Cuomo Prime Time remains a top 10 cable news show among adults 25-54. CNN’s top show finished No. 8 in August in the key demo, averaging 418,000 viewers from the category.

Morning Joe gave Fox & Friends a run for its money this month, but couldn’t quite outperform what has been the most-watched and highest-rated morning cable news show for decades in Fox & Friends.

Shifting over to cable news performance among adults 25-54, Hannity and Tucker Carlson Tonight remained No. 1 and No. 2, respectively. However, The Ingraham Angle moved past The Five and into third place in this measurement.

That’s six shows from Fox News, two programs from MSNBC and two shows from CNN comprising the top 10 for August.