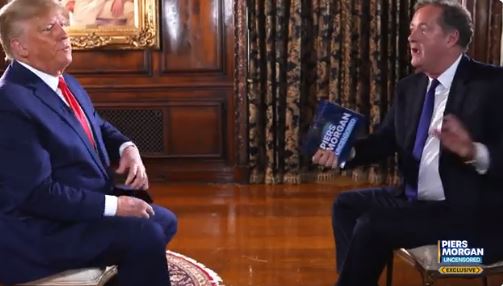 Piers Morgan sat down for what appears to have been an “explosive” interview with former President Trump for his new show, Piers Morgan Uncensored airing April 25. Morgan’s new, 60-minute daily show will be streamed on Fox Nation in the U.S., broadcast in the UK on TalkTV and aired in Australia on Sky News Australia.

The promo for the interview Morgan posted on his Twitter account Wednesday makes it seem as though the former president became so fed up with Morgan’s tough questioning that he abruptly ended the interview.

The 30-second tease ends with Trump arguing with Morgan about the results of the 2020 presidential election.

“You lost!” Morgan said. Trump then responded, “Only a fool would think that.” After some arguing, the tease shows Trump getting out of his seat.

“Let’s finish up the interview,” he finally said. “Turn the camera off. Very dishonest.” That’s where the tease ends.

However, according to the former president, the 30-second tease lacks context. In fact, Trump’s communications director proceeded to leak audio of the final 7+ minutes of the interview to NBC News to prove his case. NBC did not publish the audio recording, but released some of the transcript and covered the story.

In the audio obtained by NBC, a press aide for Trump can be heard saying Morgan needed to wrap up the hour-long interview. The interviewed had gone on for an hour, but apparently was only supposed to last 20 minutes.

Morgan tried to brush off the rep, and said he wanted to ask Trump about his recent hole-in-one. Trump, as one might expect, was happy to speak about that and while the promo makes it seem like the president stormed off the set (like he did during his interview with 60 Minutes Lesley Stahl), according to the audio, the sit-down actually ended on a positive note. In fact, the two men thanked each other and laughed at the end of the interview.

Former Pres. Trump released the following statement after the tease was released:

Piers Morgan, like the rest of the Fake News Media, attempted to unlawfully and deceptively edit his long and tedious interview with me. He wanted to make it look like I walked out on the interview when my time limit of 20 minutes went over by an hour. The good news is that the interview was taped by us as a means of keeping him honest. The interview was actually very strong on the 2020 Election Fraud, with me calling him “a fool” if he truly believed those results. The evidence is massive and irrefutable (check out Truth the Vote and the Dinesh D’Souza documentary, which will all be coming out soon). For those who want to make Piers look bad, compare his video promo and how it was doctored to the real thing. Hopefully they will now be doing some big changes to their final product. It just shows, however, what I have to deal with in the Fake News Media. He went out of his way to deceptively edit an interview and got caught. That is a big story, isn’t it?

Morgan proceeded to write an op-ed for the New York Post on Wednesday stating that “Trump tried to end things by declaring, ‘That’s it!’ before I reminded him that we hadn’t discussed his hole-in-one, which he then sat down again and did—briefly—before abruptly jumping to his feet, looking hateful, and barking at the shocked crew: “’TURN THE CAMERAS OFF!’”

According to NBC News, News Corp. declined to discuss the matter. “We have nothing to comment beyond the public information (i.e. the video clip and Piers’ column in the NY Post),” a News Corp spokesperson wrote in an email to NBC News.