NEXT:Scott McLean Joins CNN as Denver-Based Correspondent
PREVIOUS:Fox News, MSNBC Finish No. 1 and No. 2 on All of Cable Last Week 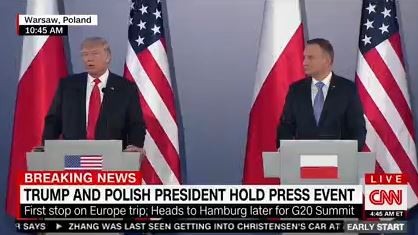 The Daily Mail’s David Martosko was one of two U.S. journalists called on at this morning’s bi-lateral news conference with Pres. Trump and Polish President Duda. Martosko later found himself defending being called on after criticism from CNN’s Jim Acosta.

Martosko got in two questions, one about North Korea and the other about “the whole wrestling video thing.”

“CNN went after you and has threatened to expose the identity of a person they said was responsible for it. I’d like your thoughts on that,” said Martosko.

“I think what CNN did was unfortunate for them. As you know, they have some pretty serious problems. They have been fake news for a long time. They’ve been covering me in a very, very dishonest way,” Trump said, adding, “NBC is equally as bad despite the fact that I made them a fortune with The Apprentice.”

"They have been fake news for a long time" – Donald Trump criticises CNN and NBC at Poland press conference https://t.co/zdcEXzVjzi pic.twitter.com/dL4HLaBjfL

CNN’s Jim Acosta, who is also traveling with the president, took to twitter to question the questioner:

Isn't it a "fake news conference" to take a question from a reporter who is essentially an ally of the White House? https://t.co/vD7DgAZXIv

Even reminding his followers that Martosko was briefly considered for a job in the White House:

One of the questions came from a reporter who acknowledged he had just talked to WH about a job last month https://t.co/45jABeralt https://t.co/kiquwvWIWe

The thing about this … sometimes once you've painted yourself into a corner, the only thing you can do is climb the walls. https://t.co/MBAdYQguDI

For his second U.S. media question, Trump called on NBC’s Hallie Jackson who asked about election meddling by Russia. Here’s the president’s response:

President Trump claims Obama did nothing about Russian meddling because “he thought Hillary was going to win” https://t.co/OFl2E9GQ4b