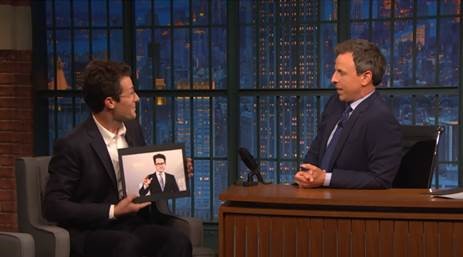 It’s no secret that late night TV has gotten increasingly political in the era of Trump. Seth Meyers – no stranger to the intersection of politics, comedy and especially Trump – is one late night host who is increasingly welcoming TV newsers onto his 12:35 a.m. program. Oftentimes he’s keeping it in the family, inviting NBC News talent to stop by and give their insights into what’s going on these days.

MSNBC’s Jacob Soboroff made his by Late Night debut yesterday. Soboroff has emerged as a leading voice on TV news when it comes to coverage on the family separation issue at the U.S.-Mexico border, and was one of the first 10 people granted access to the Brownsville, Texas migrant detention facility in June.

He chatted with Meyers about his awkward conversation with former vp Joe Biden, reporting from the border, the upcoming Thursday deadline surrounding the migrant children issue, and the fact that Soboroff, an LA native, has a striking resemblance to Hollywood producer/director J.J. Abrams.

Additionally, Katy Tur appeared on Late Night with Seth Meyers last week, though it wasn’t her debut appearance on the show. She reflected on her infamous exchange with President Trump on his emails, among other things.