NEXT:Fox News CEO Suzanne Scott Shares Thoughtful Advice on Becoming the Boss 'You Want (and Don’t) Want to Be'
PREVIOUS:Fox News Expands Its Existing Partnership With SiriusXM and Pandora

In the midst of a worldwide public health emergency, and now worldwide protests against police brutality and the murder of Black Americans, people are consuming news and information at record rates. In some ways, that’s a positive. You want an informed society. But how much news is “too much” news?

From April 28 to April 30, digital marketing agency Digital Third Coast surveyed 2,031 people to learn how their relationship with media has changed in the wake of the coronavirus. The results from the study were recently published.

All in all, 66% of respondents said they’re consuming more news than usual during this Covid-19 period. 50% say they’ve introduced news sources of information to their daily diets, 45% believe the news media has overreacted to the Covid-19 pandemic, and 54% feel news coverage has caused confusion.

The latter stat is especially unfortunate.

How about trust? As one might have guessed, Democrats are more likely to trust the news media than Republicans. We’ve been seeing this for years, but the trust gap seems to be getting wider as of late. Additionally, 68% of millennial respondents trust the news. 64% of Gen X-ers 60% of boomers trust it, but only 59% of Gen Z trust the news media.

Perhaps the most depressing stat of all is that two in three respondents say watching the news causes anxiety, and 67% experience “burnout.”

This increased level of anxiety over current events has also carried over to social media. In fact, the study found roughly 25% of respondents have gotten into an argument on social media over Covid-19, while 20% have gone so far as to “unfriend” someone.

While 40% say their social media use has also increased, 69% think it does more harm than good when it comes to getting accurate information about Covid-19. 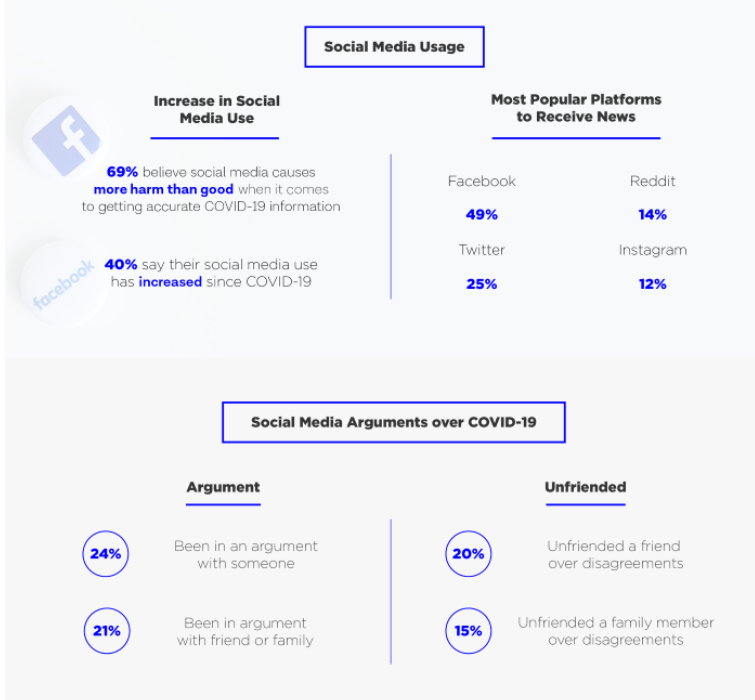 It’s worth remembering that this study was taken at the end of April, and now we’re in June. It’s quite possible these numbers have gotten even worse. What’s the solution? It’s obviously tough to know. If only it were as easy as turning off the TV or the computer for a little while. Get some fresh air (while wearing a mask, of course). Open up a book. Take up yoga.

TVNewser obviously thinks it’s important to consume television news, but cutting back, at least for a time each day, probably wouldn’t be the worst thing in the world!