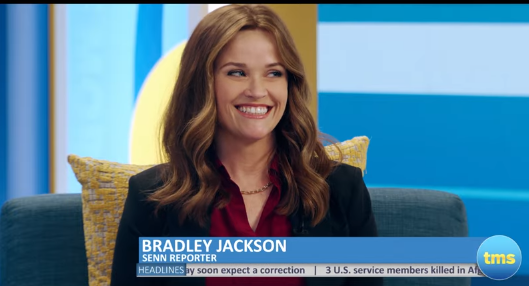 Now, the two-minute, 50-second trailer is out and it’s pretty dramatic.

Based on the footage below, Aniston plays the show’s veteran host. Carell’s character is Aniston’s on-air partner and cohost of 15 years, who just been fired from the program, news which Aniston’s character announces on air.

“Good morning. I am bringing you some sad and upsetting news. While I don’t know the details of the allegations, Mitch Kessler, my co-host and partner of 15 years, was fired today.”

We see Carell’s character not take the news particularly well.

Witherspoon plays a new, young, up-and-coming reporter on the fictional morning show, who joins after Carell’s character leaves. Witherspoon’s profile is rising, while Aniston’s stock now seems to be falling.

The Morning Show is inspired by Brian Stelter‘s 2013 book Top of the Morning, a book about the heated morning show battles that the TVNewser founder wrote while he was a New York Times media reporter.

The CNN Reliable Sources host will consult on the project.

Apple picked up the series in November 2017 with a two-season, 20-episode order.

Apple TV+ will launch in the fall (specfic launch date is TBD) as an ad-free on-demand streaming service featuring original programming, documentaries and movies. The price point has not been announced.