NEXT:Lesley Stahl on Her 60 Minutes Interview with Trump: 'He Enjoyed the Sparring; He Said So, and I Could Tell He Enjoyed It'
PREVIOUS:Megyn Kelly: 'One of the Things People Don't Understand Is the Difference Between Power and Success' 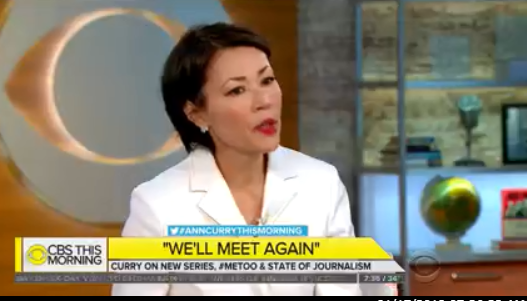 Ann Curry is taking her talents from broadcast to cable, and will anchor and executive produce a new, 10-part unscripted series for TNT, named M.D. Live.

The two-hour weekly event will tap into the worldwide phenomenon of medical crowdsourcing, with Curry reporting true stories of medical mysteries and crowdsourcing for doctors and people experiencing similar symptoms in the search for diagnoses.

While not a traditional newscast, M.D. Live will technically the first live television program Curry has anchored since departing NBC’s Today show in June 2012.

“Real good could come of this. We aim to help break down the walls that still stop people from accessing the medical information they need. Harnessing the full power of both television and technology to connect people interactively with doctors all over the world is a step toward a future when we are not limited by where we live or whether we can find the right doctor,” Curry said in a statement. “This is a new way of doing things, a new genre of broadcasting and a chance to help people.”

With M.D. Live, TNT is trying to appeal to the same audience that has turned A&E’s Live PD into such a hit for that networks.  The series, which will air over 10 weeks, is set to premiere in 2019.

“With a distinguished career as a trusted journalist and reputation as a humanitarian, Ann Curry is the perfect partner to lead our charge crowdsourcing hope and helping our patients solve their medical mysteries,” added Michael Bloom, svp of unscripted and live programming for TNT. “Ann is among the most trusted storytellers of our time who will motivate viewers, connect communities and inspire hope. And by leveraging the power of WarnerMedia’s reach we will be able to engage our viewers and really help them wherever they are.”

M.D. Live is co-produced by Turner and Lionsgate TV.

The longtime Today show co-anchor has consistently shown had a passion for reporting on humanitarian crises, and looking for ways of bringing people together. This continued in her post-NBC News years with her PBS program, We’ll Meet Again with Ann Curry.

It has been a bit of a rocky road for Curry. As previously mentioned, the award-winning TV newser was pushed out as Today show co-anchor in June 2012 after 15 years on the program, before leaving the network entirely in January 2015.

Her former colleague Matt Lauer was fired from the Today show in November 2017 after a detailed complaint of sexual misconduct.

In its internal investigation into Lauer earlier this year, the network “found no evidence indicating that any NBC News or Today Show leadership, News HR or others in positions of authority in the News Division received any complaints about Lauer’s workplace behavior prior to November 27, 2017.”

However, April, in a story about NBC’s apparent shrugs at reported workplace sexual harassment, the Washington Post spoke with Curry who said she talked to two members of NBC’s management team in 2012 after a female staffer told her she was “sexually harassed physically” by Lauer.

Curry declined to name the NBC managers she talked to. NBC News said it had no record of the warning.