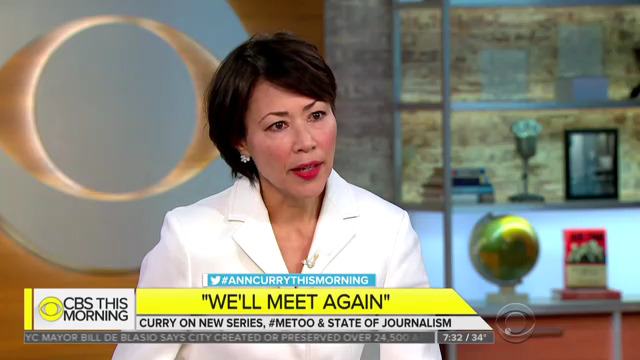 Ann Curry is back on morning television. At least for one day.

The former Today show co-anchor, who departed the program in 2012, appeared on CBS This Morning today to promote her new six-part PBS series We’ll Meet Again, to talk about the #MeToo movement in the media industry, and was also asked about her former Today show colleague Matt Lauer, who was fired in November 2017 after a complaint of sexual misconduct.

Curry is appearing on today’s broadcast for two segments. The first 10-minute segment with Gayle King, Norah O’Donnell and John Dickerson took place during the 7 a.m. hour, when ratings are generally higher, where conversation focused on harassment and her past at NBC News.

She will return during the 8 a.m. hour to speak about the new PBS show, which premieres on Jan. 23.

“I think it’s long overdue. We’re waking up to a reality and injustice that’s been occurring for some time and I think it will continue to occur until the glass ceiling is finally broken. This is about power and power imbalance where women are not valued as much as men. I’m not talking about men being attracted to other people. I’m talking about people in the workplace who are powerful, who are abusing that power, and women and men are suffering. And I think the fact that people are speaking out is important, and that we are moving against this imbalance of power is absolutely overdue.”

O’Donnell then asked Curry about Matt Lauer. “I can tell you that I am not surprised by the allegations,” she responded after some hesitation.

“Why aren’t you?” King followed up.

“Well, I would be surprised if something like that did not occur … there was verbal harassment there,” continued Curry, clearly uncomfortable with the line of questioning.

She was also asked about the addition of Hoda Kotb to the Today show anchor team.

“As you know, many people who watch and who are on the broadcasts are women, it’s overwhelmingly women,” said Curry. “The idea that women are involved speaking to women is actually an overdue idea. So, I absolutely think it’s a good idea.”

Curry spent 15 years at NBC News, rising to co-anchor of the Today show before her departure. At the time, her then-co-anchor Lauer was assumed by most to be behind the plan to push her out. Curry stayed with NBC News for 2 1/2 more years working on various special projects before departing the network altogether in 2015, and created her own production company.