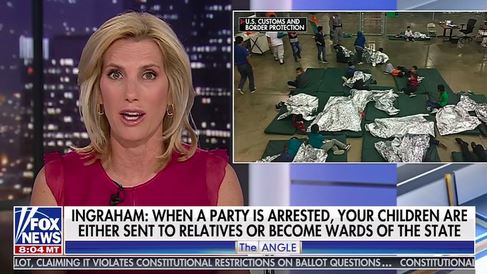 A day after critics lambasted conservative firebrand Ann Coulter for calling some undocumented immigrants “child actors,” Fox News host Laura Ingraham is explaining a controversial comment she made on the subject.

First to Coulter, who on Steve Hilton‘s show Sunday night said, “these child actors weeping and crying on all of the other networks 24/7. Don’t fall for it Mr. President. I get nervous when he gets news from TV.”

That led to a flood of stories and tweets which led to Coulter to be a trending topic on twitter. For much of Monday, she fired back:

If you had 3 functioning brain cells, @oliverdarcy, you’d be able to find 1 article on how phony asylum cases are. NEW YORKER, 2011 – https://t.co/voVMiW9YJk https://t.co/MWn9AZppNh

Then last night, Fox News host Laura Ingraham said at the start of her show, “illegal immigrants are being separated from their parents and temporarily housed in what are essentially summer camps.”

At the end of the show, Ingraham explained:

“Apparently there are a lot of people very upset because we referred to some of the detention facilities tonight as essentially like summer camps. The San Diego Union-Tribune today described the facilities as essentially like what you would expect at a boarding school. So I will stick to there are some of them like boarding schools. And I suggest that a lot of the folks who are worried about that spend more time in Central America. I have. And we should make adoption easier for American couples who want to adopt these kids who are true candidates for adoption because our policies don’t allow that. So let’s put our hearts out there for the kids in the right way. Take care of them the right way. Open your hearts and your homes to them.”

But that wasn’t enough of an explanation for many, as Ingraham now finds herself trending on twitter.