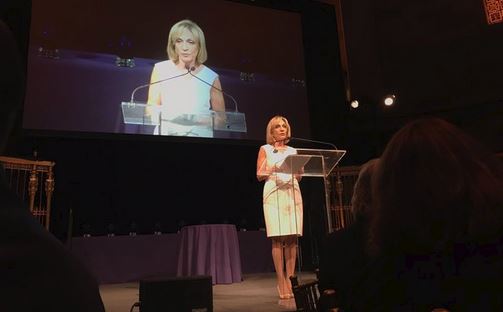 NBC’s Andrea Mitchell says the first time she met CNN president Jeff Zucker she threw him out of her office.

“I came into my office in the D.C. bureau one day and found this kid sitting at my desk, on my computer,” Mitchell said today. “Before throwing him out I paused long enough to ask who the heck he was and what was he doing there? He told me he was a sports researcher for my friend Katie Couric – working with her to prepare for the Seoul Olympics.”

Today both Mitchell and Zucker were among those honored as Giants of Broadcasting by the International Radio and Television Society (IRTS) Foundation.

“Fortunately Jeff didn’t hold that introduction against me when he the boy wonder became Today show Executive Producer at the age of 26 – and not that many years later President of NBC,” Mitchell said.

In her remarks, Mitchell took a queue from Pres. Trump, when, in a tweet back in February, he called the “FAKE NEWS media” “the enemy of the American people.”

In what seems like a return to the glory days of broadcast and cable news, despite the relentless pressure to keep up, a word of caution. We have to resist conventional wisdom and remain open to new conclusions. To keep digging and prying and pushing back. As we try to disentangle a complex web of facts, always remembering that first and foremost, we are storytellers. And as we learn them, the facts will eventually inform our stories. Finally, I’m grateful because being among you today helps reinforce my belief in our essential mission. As a journalist, and I am including in this community all of you who through your many talents keep the business going that enables us to do our work: we are not the Enemies of the People. We are the eyes and the ears of the people.

Deadline has a look at the other honorees which also included CBS’s Jeff Fager.

"We are not the enemies of the people. We are the eyes and ears of the people" —@mitchellreports at IRTS Foundation luncheon pic.twitter.com/60HaKAK5hN