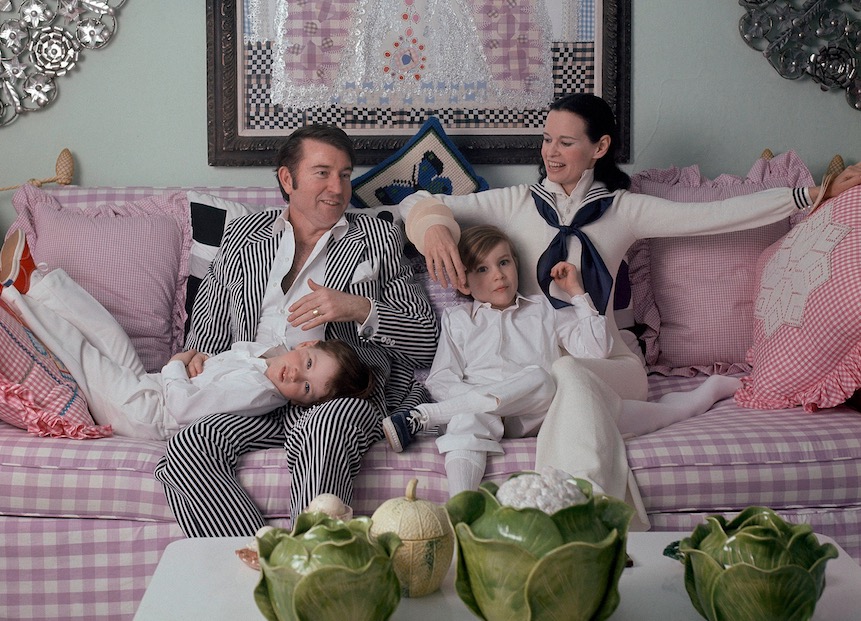 CNN received some breaking news in the 10 a.m. ET hour that Anderson Cooper‘s mother, the legendary socialite, designer, and heiress Gloria Vanderbilt died of stomach cancer at her Manhattan home. She was 95.

Cooper had a first-person obit prepared, which CNN aired.

Vanderbilt and Cooper appeared on multiple TV news programs together in recent years. In April 2016, they appeared on CBS This Morning to promote their book The Rainbow Comes and Goes: A Mother and Son Talk About Life, Love and Loss, which was about their relationship.

Mother and son also appeared together on Live with Kelly and Michael that same week, where Vanderbilt opened up–as she did in the memoir–about the loves of her life, including Howard Hughes and Frank Sinatra.

The book coincided with the release of the 2016 HBO feature-length documentary Nothing Left Unsaid: Gloria Vanderbilt & Anderson Cooper, which was produced by the CNN anchor.

In advance of the release, Cooper took part in a Q&A at the 2016 Television Critics Association press tour, with Vanderbilt in Los Angeles. Adweek’s Jason Lynch attended the session and reported that Cooper found it “kind of surreal” to interview his mother for the HBO doc.

Cooper had been collecting material about his mother since 1989, the year after his brother, Carter, committed suicide. In footage showed from Nothing Left Unsaid, Vanderbilt reflected on that time: “All I did was cry” and she hasn’t cried since: “There’s not a tear left.”

“You may know her name, but you really don’t know who she is, or what her story is,” Cooper said, adding, “I’m a different person than I was when I started this film, and I realize how much like my mother I am.”

“If one is telling the truth, there’s nothing to fear. It’s very freeing,” Vanderbilt added.

Gloria Vanderbilt, my mom, lived her entire life in the public eye. Born in 1924, her father Reginald Vanderbilt was heir to the Vanderbilt fortune but gambled away his inheritance and died when my mom was just a baby. Her mother wasn’t ready to be a mom or a widow.

My mom grew up in France, not knowing anything about the Vanderbilt family or the money that she would inherit when she turned 21. She had no idea the trouble that money would create.

When she was 10, her father’s sister, Gertrude Vanderbilt Whitney, sued to have my mom taken away from her own mother. It was a custody battle the likes of which the world had never seen. It was called “The Trial of the Century” and took place during the height of the depression. the court awarded custody of my mom to her aunt Gertrude, whom she barely knew. and the judge fired the one person she needed and loved, her nanny. As a teenager she tried to avoid the spotlight but reporters and cameramen would follow her everywhere. she was determined to make something of her life. determined to make a name for herself and find the love and family that she so desperately craved. At 17, against her aunt’s wishes she got married. she knew it was a mistake from the get go.

At 21, she married again and had two sons with the legendary conductor Leopold Stokowski.

The marriage lasted more than a decade and then she married Sidney Lumet and then my father. Over the course of her life, my mom was photographed by all the great photographers and she worked as a painter, a writer, an actress and designer.

If you were around in the early 1980s, it was hard to miss the jeans she helped create, but that was her public face, the one she learned to hide behind as a child. Her private self, her real self was more fascinating and lovely than anything she showed the public.

I always thought of her as a visitor from another world. A traveler stranded here who had come from a distant star that burned out long ago. I always felt it was my job to try to protect her. She was the strongest person I’ve ever met but she wasn’t tough. She never developed a thick skin to protect herself from hurt. She wanted to feel it all. She wanted to feel life’s pleasures, its pains as well. She trusted too freely, too completely and suffered tremendous losses, but she always pressed on, always worked hard, always believed the best was yet to come.

And she was always in love. In love with men or friends or books and art. In love with her children and her grandchildren and then her great grandchildren. Love is what she believed in more than anything. Earlier this month we had to take her to the hospital. That’s where she learned she had very advanced cancers in her stomach and that it had spread. When the doctor told her she had cancer, she was silent for a while and then she said, song, show me the way to get out of this world because that’s where everything is.

Later she made a joke and we started giggling. I never knew we had the exact same giggle. I recorded it and it makes me giggle every time I watch it.

Joseph Conrad wrote that “We live as we die: Alone.” He was wrong in my mom’s case. Gloria Vanderbilt died as she lived, on her own terms. I know she hoped for a little more time, a few days or weeks at least. There were paintings she wanted to make, more books she wanted to read, more dreams to dream, but she was ready. She was ready to go.

She spent a lot of time alone in her head during her life, but when the end came, she was not alone. She was surrounded by beauty and by family and by friends.

The last few weeks every time i kissed her good-bye, I’d say, I love you, mom. She would look at me and say, “I love you, too. You know that.” And she was right. I did know that. I knew it from the moment I was born and I’ll know it for the rest of my life. And in the end, what greater gift can a mother give to her son. Gloria Vanderbilt was 95 years old when she died. What an extraordinary life. What an extraordinary mom; and what an incredible woman.