NEXT:Bill Weir: 'I Think Any Reporter Wants to Do Stories That Comfort the Afflicted and Afflict the Comfortable on the Largest Possible Scale'
PREVIOUS:Scoreboard: Thursday, Aug. 15 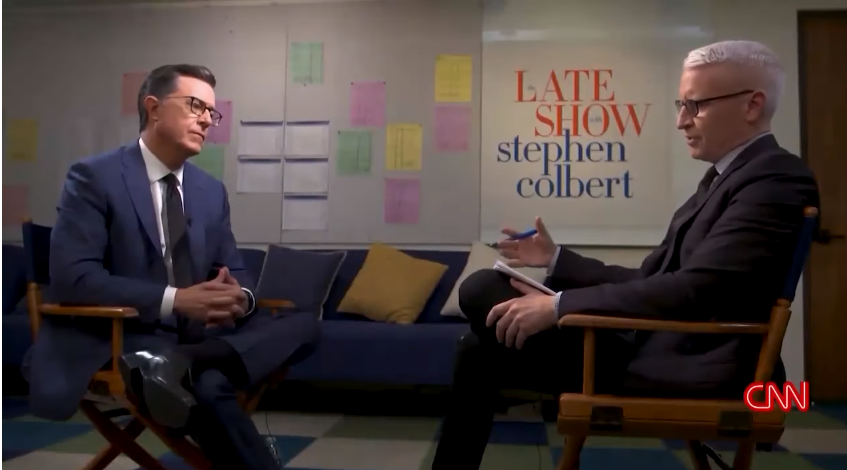 CNN’s Anderson Cooper and CBS’ The Late Show’s Stephen Colbert engaged in a wide-ranging conversation earlier this week about everything from CNN, to Trump, to faith, to loss.

The interview aired for the entire 9 p.m. hour last night on CNN.

Cooper recalled Colbert wrote him a letter after Cooper’s mother, the socialite, designer, and heiress Gloria Vanderbilt, died two months ago at age 95.

“I hope you find peace in your grief,” he wrote.

Both men are all too familiar with loss. In addition to his mother passing away in 2013 at the age of 92, Colbert’s father and two of his brothers died in a plane crash on Sept. 11 1974, when the Late Show host was just 10 years old. Cooper’s father also died when the anchor was just 10, and Cooper’s older brother committed suicide when he was in his early 20s. These two men have a lot of common, aside from fame.

Many may not be aware, but Colbert is a deeply religious man. For instance, it has been reported on many an occasion that he teaches Sunday school at his local Catholic church in suburban New Jersey.

“You told an interviewer that you have learned to, in your words, ‘love the thing that I most wish had not happened,’” Cooper said at one point during the interview.

But before he could continue, Cooper paused, briefly overwhelmed with emotion. “You went on to say,” Cooper continued, his voice cracking, “what punishments of God are not gifts. Do you really believe that?”

He added: “It’s a gift to exist. And with existence comes suffering. There is no escaping that. I guess I’m either a Catholic or a Buddhist when I say those things.”

Referencing the death of his father and brothers, Colbert continued: “I don’t want it to have happened, I want it to not have happened, but…If you are grateful for your life, which sit a positive thing to do. Not everybody is, and I’m not always. But it is the most positive thing to do. Then you have to be grateful for all of it. You can’t pick and choose what you’re grateful for. And then, so what do you get from loss? You get awareness of other people’s loss, which allows to you connect with that other person, which allows you to love more deeply and to understand what it is like to be a human being if it is true that all humans suffer.”

You said “what punishment of gods are not gifts. Do you really believe that?” @andersoncooper, choking back tears, asks Stephen Colbert, as they discuss grief.

“Yes,” replies the comedian. “It’s a gift to exist and with existence comes suffering. There’s no escaping that.” pic.twitter.com/p5rUUhZKxq

As mentioned, the interview wasn’t exclusively about faith, love and loss. There was significant discussion about politics, Trump and CNN.

“I blame you for Ken Cuccinelli,” Colbert told Cooper, and not in a joking manner.

Cuccinelli is a former CNN contributor-turned U.S. acting director of of citizenship and immigration services, who infamously said on NPR earlier this week “Give me your tired and your poor who can stand on their own two feet and who will not become a public charge,” changing Emma Lazarus‘ famous words on a bronze plaque at the Statue of Liberty.

Colbert then pressed him. “Was there anything you ever asked him and thought, ‘I’m going to get an honest answer’?’”

“His answers are very thought out in terms of the grammatical structure of them and can be confusing which I think is part of the strategy,” Cooper explained.

When Cooper directly asked Colbert if he would want to have Trump on again — the comedian hosted then-candidate Trump in a comedic segment in September 2015, the host immediately declined.