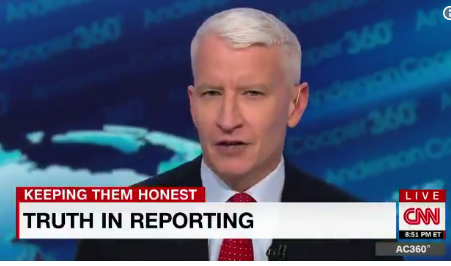 One rarely sees Anderson Cooper ever feel the need to clarify or explain his own journalism on-air; but he felt he needed to do so tonight.

Yesterday morning, Donald Trump Jr. claimed via Twitter that Cooper was exaggerating his on-ground reporting of Hurricane Florence, and that he was actually kneeling in the floodwaters created by Florence in order to make his dad “look bad.”

Cooper ripped into Trump Jr. for spreading what was actually a misleading photo of the CNN anchor (click on the link above to see the photo) in order to falsely claim that Cooper was making a political statement against Pres. Trump.

The photo that Trump Jr. tweeted to his millions of followers is of Cooper covering Hurricane Ike in 2008 from the scene. It’s not even a photo of him covering Florence.

Cooper later said it was “frankly idiotic” to believe that he kneeling in water to make it look deeper than it really was. He went on to explain to his viewers what exactly transpired at that time, and how he and his crew covered the area back then amid the treacherous conditions.

I’ve covered hurricanes for about 14 years and it really does make me sad to think that anyone would believe that I would try to fake something or overly-dramatize a disaster. I debated whether I should even respond to the president’s son. I know he believes himself to be an outdoorsman and pays a lot of money to be led to wildlife in Africa that he then kills, but I’m not sure if he’s ever actually been to a hurricane or flood. I didn’t see him down in North Carolina in the last few days helping out, lending a hand, but I’m sure he was busy doing something important besides just tweeting lies.

“The idea I am kneeling in water to make it look deep is idiotic.” @AndersonCooper debunks the lies being spread by Donald Trump Jr., and others who falsely claimed he and his team exaggerated the severity of Hurricane Florence. #KeepingThemHonest https://t.co/j2HptrYpe0 pic.twitter.com/zwfvIXCsIY

Not surprised @AC360 lied about me on @CNN last night. Par for the course. I never said the pic of him was from Florence.

When I tweeted out the picture of @AC360 it was with a link to an article about CNN’s dwindling ratings. Nothing to do with Florence. https://t.co/fflwOa10GK