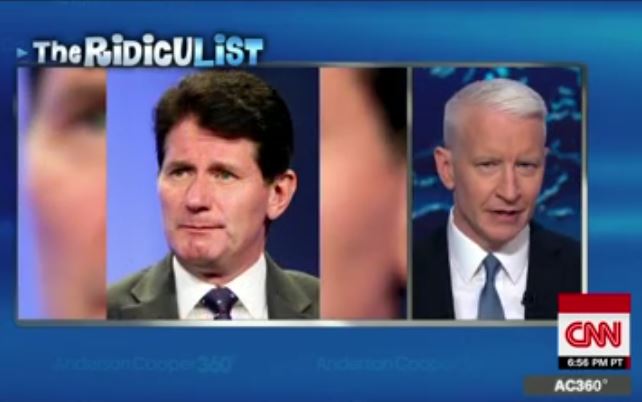 Anderson Cooper admits that he tries to avoid “cable news sniping,” but he couldn’t let pass something that occurred at Fox News late last week.

Executive editor and Fox News evp John Moody penned a column called, “In Olympics, Let’s Focus on the Winner of the Race, Not the Race of the Winner.”

He wrote, in part, “Unless it’s changed overnight, the motto of the Olympics, since 1894, has been ‘Faster, Higher, Stronger.’ It appears the U.S. Olympic Committee would like to change that to ‘Darker, Gayer, Different.’”

That led to protests from several organizations including Glaad and the HRC. Fox News then pulled the column, saying, “John Moody’s column does not reflect the views or values of Fox News and has been removed.”

On his show last night, Cooper named Moody to his Ridiculist: “Mr. Moody’s comments might be funny if he was just some crank standing on the corner of Sixth Avenue outside Fox & Friends trying to get his sign on camera, with a sign saying ‘darker, gayer, different.’ But he is actually inside the building in a top position, executive editor and executive vice president.” WATCH: