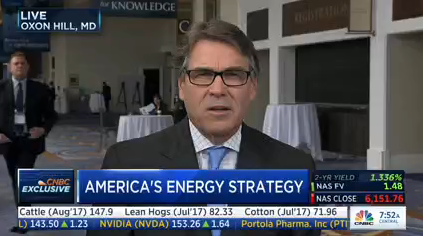 You know when you watch your local news and you see the weatherperson with the AMS seal?

Well, that’s the American Meteorological Society, and they sent a letter to the Secretary of Energy Rick Perry yesterday telling him he lacked “fundamental understanding of science” when it comes to the primary cause of global warming.

Keith Seitter, the executive director of the AMS, cited Perry’s CNBC interview on Monday during which anchor Joe Kernen asked, “Do you believe CO2 is the primary control knob for the temperature of the earth and the climate?”

“No. Most likely the primary control knob is the ocean waters and this environment that we live in,” said Perry. “The fact is, this shouldn’t be a debate about ‘Is the climate changing? ‘Is man having an effect on it?’ Yeah, we are. The question should be: ‘just how much, and what are the policy changes that we need to make to effect that?'”

In his letter, Seitter writes, “While you acknowledged that the climate is changing and that humans are having an impact on it, it is critically important that you understand that emissions of carbon dioxide and other greenhouse gases are the primary cause. This is a conclusion based on the comprehensive assessment of scientific evidence. It is based on multiple independent lines of evidence that have been affirmed by thousands of independent scientists and numerous scientific institutions around the world,” Seitter wrote. Here’s the letter in full.