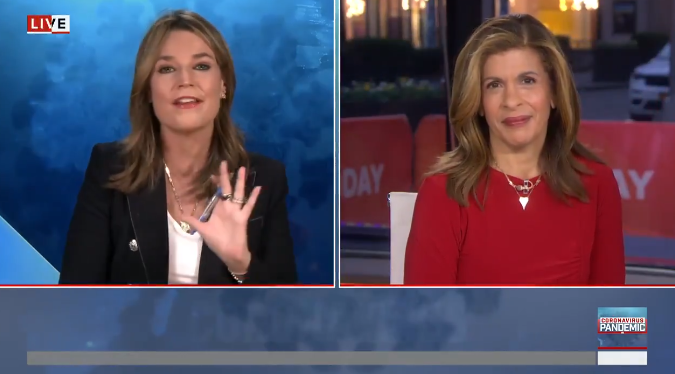 Typically “a sore throat and the sniffles” would cause many people to take a “sick day.” But these days, in the era of the coronavirus, that card is a bit tougher to pull. Millions of Americans are working from home these days.

And that includes Savannah Guthrie, who co-hosted Today show from the basement of her home. Needless to say, this was a first for Guthrie. “This was the shortest commute in the world,” she quipped.

Hoda Kotb co-hosted the show from Studio 1A, while Al Roker and Craig Melvin continued to co-host the program from their respective homes, something both have been doing the past couple of days after at least one of their 9 a.m. colleagues tested positive for the virus.

“It’s a little Brady Bunch-esque, looking at these three-box,” said Kotb. “But I’m happy to be sitting in between you guys.”

“This show’s been around a long time. … but never has this happened before.” @savannahguthrie and @alroker discuss what it’s been like working from home while @hodakotb holds down the fort in Studio 1A pic.twitter.com/uhCdmAVp4Z

Roker added that he’s doing OK, and his son had yet to come down for breakfast: “It’s eerie, but folks I’ve seen in my neighborhood – everybody’s practicing what Dr. Fauci and the group are preaching.”

Guthrie added: “The CDC is saying that if you’re sick at all, this is the time to stay home. I’m thinking of it as a way of loving your neighbor and keeping them safe.”

Playing it safe and staying home probably wasn’t the worst idea world thing in the world anyway, even if Guthrie wasn’t sick.

There have been instances of the COVID-19 at NBC News. The network announced earlier in the week that it has shelved live content for the 9 and 10 a.m. hours of show going forward, a day after learning a staffer from the 9 a.m. hour had tested positive for the virus.

Granted Guthrie is not on-air that hour, but it’s likely she interacts with people who are.

It remains to been seen if Guthrie will return to Studio 1A tomorrow (her husband is acting as her producer in the guest bedroom-turned-studio), but Kotb will remain. Roker and Melvin will not.

Live… from my basement… this is TODAY. Big shoutout to my husband @feldmike who has turned into producer and technician!! pic.twitter.com/HqsnH4ZmJn