NEXT:Sean Hannity Invites Jimmy Kimmel to Come on His Show
PREVIOUS:ABC's Jim Avila to Undergo Kidney Transplant. The Donor Is His Brother 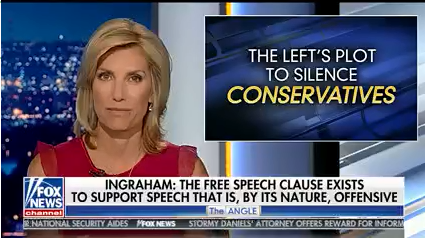 After a taking a pre-planned week-long vacation with her kids, Fox News prime time host Laura Ingraham returned to the Ingraham Angle this evening.

She had plenty of choice words for her critics during tonight’s opening Angle, saying, among other things, that “we are reaching a crisis point where cultural walls have now being erected to conscript and steal free speech in America. We cannot let this continue…”

Ingraham seems to have full support from her employer, but there are noticeably fewer brands buying ad time on The Ingraham Angle compared to other Fox News programming. At least that was the case this evening.

Excluding network promos, ad time for this evening’s broadcast was between 9 and 10 minutes.

According to an analysis by Kantar Media, from March 12-28, the average ad time during the show was 15 minutes 13 seconds. By last Friday, March 30–two days after Hogg’s boycott call–ad time was 7 minutes, a 40 percent drop.

The entire ordeal started on Wednesday March 28, when Parkland student and gun control activist David Hogg accused Ingraham of bullying tactics after she criticized him on Twitter for not being accepted by a number of colleges to which he applied. Hogg called for an advertiser boycott of her program on social media, and many advertisers have obliged.

Ingraham apologized the following day, but Hogg says he won’t accept her apology because it only came after advertisers began pulling out.