NEXT:Trump at CPAC: 'You Don't Mind If I Go Off Script, Right? Because This Can Be a Little Boring'
PREVIOUS:Scoreboard: Thursday, Feb. 22 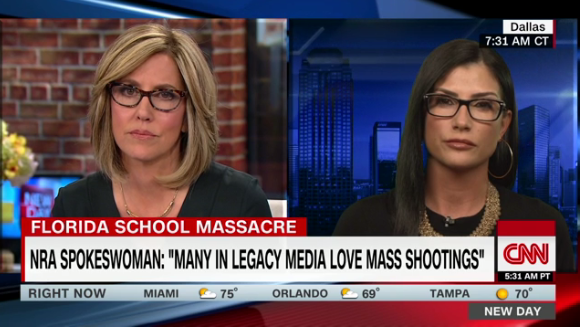 This morning, New Day co-anchor Alisyn Camerota participated in a combative back-and-forth with NRA spokeswoman Dana Loesch in light of her controversial comments on Thursday night at CPAC.

Camerota pressed Loesch on those remarks this morning:

The New Day co-anchor spoke with TVNewser this afternoon about that interview, as well as what she’s seeing in Parkland, Fla. right now.

TVNewser: Have you ever had an interview like the one you had this morning?

Camerota: Well, I feel like in the past month or so, I, for some reason have had several of these interviews. I’m thinking of the Jack Kingston one from last week (he claimed Democrats coached the shooting survivors). I’m thinking of the one with the Republican candidate who was president of the Nazi party (Arthur Jones, candidate in the Republican primary for Illinois’ third Congressional district). There have been a few interviews in this category where somebody has said something so outrageous that it just can not stand as is without being challenged. Some of these have been so beyond the pale and so outrageous and you have to call them out and start there.

TVNewser: At the conclusion, Loesch remarked: “It was a good conversation.” Do you agree?

I think we worked our way around to a more substantial conversation. I did want to hear about the NRA’s positions on all of these things that are being talked about. That was my goal, to hear where the NRA stood. I do think I got some information out of her, and we worked our way around to that. By the end of it, I think it was substantial. So, yes.

TVNewser: Do you think she was partly playing to the CPAC crowd with those comments? Was there some other point you felt she was trying to make?

Yes, she was playing to her audience there. Just like the night before how she was playing to the audience, and was different from when she was on the CNN stage at the Town Hall. I was just trying to make the point of: “What happened? Why were you so sensitive towards the kids, saying that you felt for them, that you were scared for them?” She was trying to relate to the students on the stage during the Town Hall. I took her at face value when she was there that night, and I thought that she really felt that way. I honestly wanted to know what exactly changed in that span of 24 hours that would lead her to make such a vile claim by saying that the media loves mass shootings. I just wanted her to come on and try to defend herself.

TVNewser: Has it been difficult to get Stoneman Douglas students to open up to you and to appear on camera? How about parents and others?

I’ve dealt with all of the kids and all of their parents, and it hasn’t been tough at all. This is one of the really remarkable things about this story. The kids wanted to get their message out and they wanted to talk. I haven’t had to cajole them. I haven’t had to knock on doors. Look, I’m no stranger to covering tragedies. I’ve done this my entire career. It does often take some sitting with the family and getting them comfortable, but not in this one. I’ve been so struck by how the parents even in their darkest hour of grief have shown up at our cameras and wanted to get their message out. They have wanted cry from the rooftops to their lawmakers, needing to be heard. I felt that way about all the kids. I’ve even asked them: “Are we putting too much pressure on you?” Because there were crazy conspiracy memes eviscerating them. I asked, “Do you feel manipulated?” And they laughed, and said “Thank you for being here, and thank you for letting us get our message out.”

TVNewser: We’re nine days removed from the shooting, and the media continues to cover this story with intensity. This wasn’t necessarily the case with Vegas and Pulse Nightclub. Why do you think that is?

It’s all about the kids. What I have learned in these past 9 days is that if you want heat and intensity, talk to a teenager. They embrace a cause, they’re passionate, and they’re very intense. They’re really driving this. That’s what makes this different. Obviously, they’re grief striken and they’re traumatized, but they just sprung into action and it was really remarkable. I interviewed David Hogg and Kelsey Friend a few hours after the attacked. We traveled all night, got there, got in the position. It was just a few hours after this horrific scene. They already felt their purpose in wanting to talk about it. It’s very noteworthy how different these kids are processing what has happened to them.

TVNewser: You’re a mom of three young kids. What’s the conversation with them like right now?

I just talked to them about what we should do at their school, about what they want to do and how much they want to take on. My girls are 12 years old, and so we’re the ones having the conversations more than I am with their younger brother, and just figure out if they want to be part of this. Do they want to sign petitions to lawmakers? Do they want to be part of the March a month from now? What role do they want to take? Do they feel safe? We’re just having those basic conversations about it. They’re very engaged. I didn’t have to tell them the news, they hear about it at school. I’d like to shield them from horrible news like that, but there’s no shielding kids in this era of social media. I think they feel activated as well. No one wants to go to school and feel scared so they have to do shooting drills. I think they too are looking for solutions. I’m following their lead, and at the moment, they’re just asking questions and trying to figure out what form they want it to take at their school.