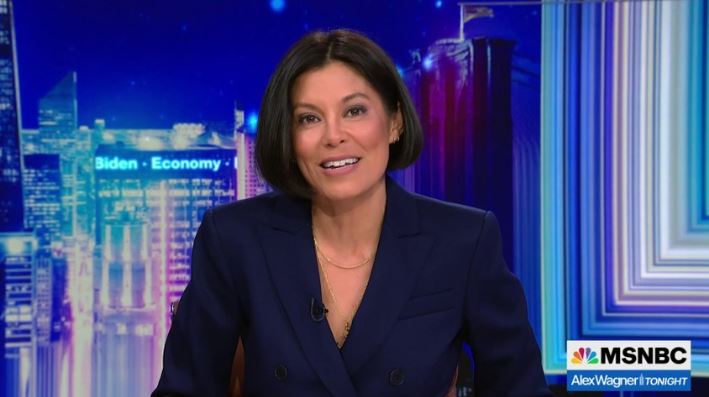 Alex Wagner officially debuted her new primetime show on MSNBC Tuesday—and received quite an intro from her lead-in, Chris Hayes.

“Now, for the first time ever here in primetime, the premiere of Alex Wagner Tonight starts right now; Good evening, Alex!” exclaimed Hayes, seated in the same studio as the network’s newest primetime host. “Look how close we are, America! This is incredibly exciting, we’re going to be next to each other now … ”

This was indeed a unique “handoff,” with Hayes and Wagner noting they’ve known each other for 25 years. The duo both graduated from Brown University at around the same time.

The new host then dove into her program.

“I am thrilled to be here and honored to have this hour every night Tuesday through Fridays to spend with you. Like most of you watching right now, I’ve been a longtime viewer of the Rachel Maddow Show—and I hope to live up to the incredibly high standard she has set in covering the stories of the day and bring in context of this moment that we’re living through together. With that, let’s get started.”

Then, the tech “gremlins” appeared. Wagner appeared to tease upcoming segments about two minutes into the broadcast before suddenly reacting to something being said in her IFB, possibly the control room telling her to keep going. So, she did, diving into the opening story about Rep. Liz Cheney‘s bid for re-election in Wyoming.

CNN’s Brian Stelter said in his Reliable Sources newsletter that after watching the clip a couple of times, he felt she was starting to read a script from a rehearsal show last week. “She raised her hands to get the control room’s attention, then pivoted to her intro about Cheney’s fate in the primary,” he added.

Wagner took a moment after an in-studio interview with The Atlantic’s Mark Leibovich to acknowledge “technical gremlins”—and then threw to the first commercial break.

There also seemed to be a delay during a remote interview with Rep. Adam Kinzinger —and Steve Kornacki was seemingly caught off guard on camera at one point during the broadcast.

During the handoff to Lawrence O’Donnell, the veteran 10 p.m. host acknowledged Wagner’s technical “gremlins” and said that the teleprompter went out in the middle of his first-ever broadcast of The Last Word 12 years ago. And yet, he’s still on the air.