ABC has picked up a talk show hosted by Alec Baldwin called “Sundays with Alec Baldwin,” which sort of locks ABC into which day it will air.

The first episode airs Sunday night after the Oscars.

“I’m excited about this show and grateful to ABC for taking a chance on me in what is, admittedly, a crowded field,” said Baldwin.

The one-hour show will take queues from Baldwin’s podcast which is produced for WNYC radio in New York. The first episode includes interviews with Jerry Seinfeld and Kate McKinnon.

“I’ve enjoyed doing my podcast for WNYC and look forward to the challenge of doing a show on camera,” said Baldwin. Though this is not his first talk show on camera. He hosted Up Late for several weeks in the fall of 2013 on MSNBC. After a few episodes aired, MSNBC suspended Baldwin after he was caught on tape berating a paparazzo. MSNBC canceled the show a few weeks later.

Baldwin also hosts and executive produces Match Game for ABC. “Alec’s intellect, wit and wealth of life experience afford him a voice and perspective we haven’t seen before in this format,” said Channing Dungey, president, ABC Entertainment in a statement. 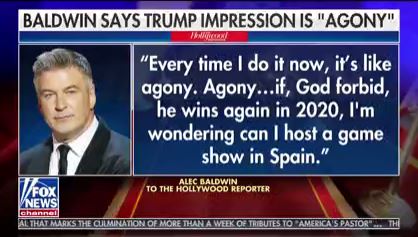 This morning, after Fox & Friends First aired a story on Baldwin, President Trump tweeted this:

Alec Baldwin, whose dying mediocre career was saved by his terrible impersonation of me on SNL, now says playing me was agony. Alec, it was agony for those who were forced to watch. Bring back Darrell Hammond, funnier and a far greater talent!

That tweet was a correction from an earlier thought in which Trump wrote, “Alex Baldwin, whose dieing mediocre career…”