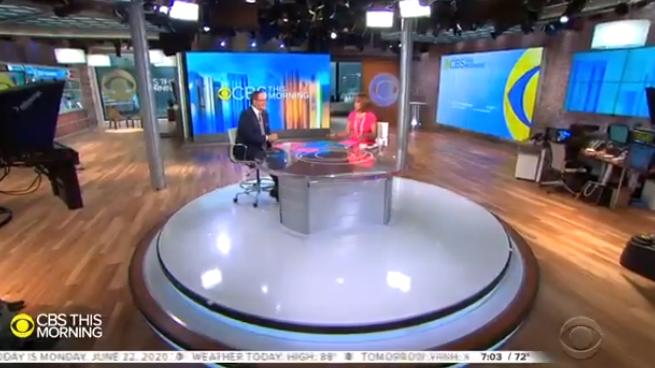 After nearly 100 days away from the office, CBS This Morning returned to its home, Studio 57 at the CBS Broadcast Center in New York.

Not only have CBS This Morning’s host trio of Gayle King, Anthony Mason and Tony Dokoupil been remote for the entire time, but the control room has been away from its stomping grounds for this entire time as well.

King and Mason were back at the table this morning, while Dokoupil remained at his makeshift home studio in Brooklyn. But that won’t be the case each day. The hosts will rotate.

“Because we want to be cautious, what we’re going to do is one of us will broadcast remotely just for the time being, and of those who are going in, it’s only the essential people to get us on TV everyday,” said Dokoupil. “And we are taking all the precautions. We’re being as safe as we possibly can be.”

King added that everyone is entering through separate doors and all are wearing masks when not on the air.

“I couldn’t sleep last night. I’m either nervous or excited. I’m not nervous, so I know I’m very excited to be here.”

After almost 100 days, @GayleKing & @AnthonyMasonCBS are back in Studio 57! @tonydokoupil will continue working from home for now, along with most of the staff. pic.twitter.com/NlFziAIk1t

The CBS Broadcast Center, located on West 57th Street in Manhattan, was shut down on March 11 after multiple employees were found to have tested positive for Covid-19. It is the headquarters for CBS News, CBS Sports and CBS’ flagship station WCBS-TV.

CTM wasn’t the only morning show to return home today. Fox & Friends returned to its studio at FNC headquarters as well.

“Live from New York City, ladies and gentlemen,” Steve Doocy proclaimed. “After 100 days apart, we are all back in the studio again social distancing, but nonetheless it’s good to be back live in the big room. Brian’s right there and Ainsley’s right there. Thank you for joining us.”

Brian Kilmeade added, “You know what this means—this means when we have comments on each other, we’re no longer in a delay. We can actually comment on what each other says.”

Said Ainsley Earhardt: “I know and the lighting is beautiful in here,” adding, “We also want to thank all of our staff—there are several people here. I know the guys here in the room—Joel and Dave and all of the people in the control room who were working the entire time. There were points of this where people were scared to come into the city and come into the studio and that’s why we did our home studios. We all want to thank you all for sacrificing so much and still the show must go on. We appreciate it and we love you.”

Doocy pointed out that everyone entering the building must have a mask on. “And so when we come into the building we do, but because we are socially distanced and we’ve got our own little zones we are free not to wear it,” he said. “One thing you do not know—for the last three months, we have had dedicated producers trying to remember who just talked last because I’m going to say OK Ainsley, you’re next, Brian you’re next. It was as if they were working at LaGuardia as air traffic controllers trying to keep us safe. Sometimes we stepped on each other, but hats off to the people behind the scenes.”

Earhardt added, “Remember our first shows in our studios? We were talking over each other. We had to come up with a system.”