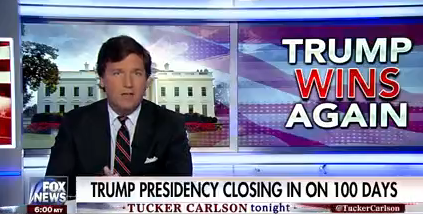 It appears the ad community’s boycott of Fox News’s 8 p.m. hour is coming to an end now that Bill O’Reilly has been forced out of the network.

A number of high-profile brands had national spots that aired during last night’s 8 p.m. premiere of Tucker Carlson Tonight. This comes after more than 50 brands had fled the hour in light of the infamous New York Times report which was published on April 1.

Mercedes-Benz, one of the first high-profile brands to pull its spots from the network’s 8 p.m. hour, had an ad which aired during the first commercial break.

Other notable brands to air spots last night during the hour after pulling them earlier in the month included Honda, Infiniti, Jenny Craig, BP, and the shirt company Untuckit.com.

This trend of advertisers returning to the program slowly but surely seems to line up with what Kantar Media chief research officer Jon Swallen told Adweek.com earlier this month.

Speaking of the program itself, Carlson opened the hour with a brief tribute to his 8 p.m. predecessor:

“Good evening. For those of you tuning in expecting to see someone different in this anchor chair, I know the feeling well. I watched Bill O’Reilly at this hour for years, and I always marveled at how well prepared he was, how tough he was, and how crisply and directly he expressed his views. What O’Reilly did was not easy. He set a high bar and I’ll do my best to meet it. Thanks for sticking with us.”