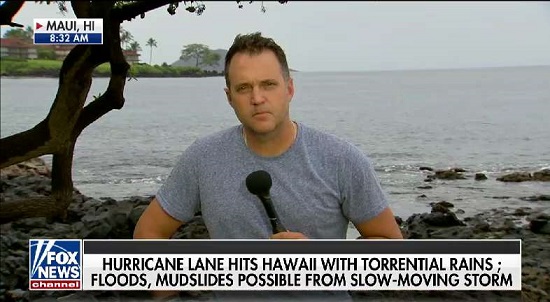 TVNewser has learned that Fox News Channel senior correspondent Adam Housley is departing the network at the end of the month.

The LA-based Housley is leaving FNC, and moving up the coast to San Francisco to spend more time with his two young kids and wife, actress/co-host of The Real, Tamera Mowry-Housley.

“We thank Adam for his many years of service – his passion for storytelling, professionalism and dedication to journalism made our reporting stand out on countless stories throughout his tenure. We wish him and his family the very best,” Fox News president Jay Wallace said in a statement.

Housley joined Fox News in 2001 as a LA-based senior correspondent, and has reported from all over the globe during his 17-year run at the network. He covered the Iraq War, the 2004 Indian Ocean earthquake and tsunami, 2005 Hurricane Katrina, the Haiti earthquake, the Chilean mining accident in 2010, the 2011 Tōhoku earthquake and tsunami, the 2014 protests in Ferguson, Mo., the 2015 San Bernardino attack and the 2017 Las Vegas shooting.

It may look serene, but the wind has kicked up and the seas are rough. Can #hurricanelane just peel off a bit more. Seriously…there’s a whole ocean out there wide open. pic.twitter.com/HqKrCQZOHW

“After nearly two decades at Fox News, I have decided to leave the network and take some time in northern California to raise our two young children closer to my family, which includes running the family winery and even coaching their sports teams,” Housley said in a statement. “I could not be more proud of the journalism I did at the network, from war zones, to tsunamis, to watching miners pulled from the ground in Chile, I am grateful for the extraordinary opportunities to have a front seat to history and cover news all over the world. A huge hank you to the many Fox employees, especially behind the scenes, who have supported me every step of the way. We are friends for life.”

His departure comes 2+ weeks after fellow Fox News correspondent, Conor Powell departed the network. Powell left, according to The Wrap, because he was uncomfortable about the direction of the news organization over the past few months.

We hear Housley is leaving for similar reasons.

The correspondent posted a ton of tweets on Friday night addressing his exit. Here’s one:

Getting some time to see all this spin has me wanting to make one thing clear. Fox gave me amazing opportunities. I am not bashing them on the way out. For you partisans, look at my news reporting. I have 17 years of solid fair work. My coverage speaks for itself.

Prior to joining FNC, Housley served as a reporter at KTXL-TV, the Fox station in Sacramento, from 1999-2001. Before entering the world of TV news, Housley was a pro baseball player, a pitcher in the Milwaukee Brewers and Detroit Tigers minor league organizations.