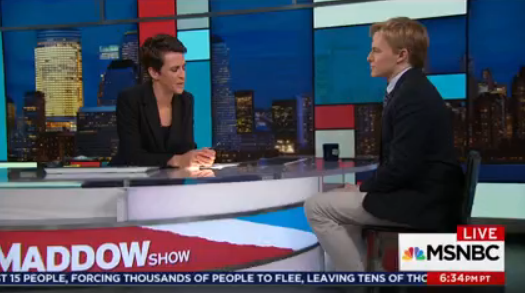 The Daily Beast and The New York Times published stories this evening within minutes of each other about how NBC News allegedly blocked Ronan Farrow‘s investigation into Harvey Weinstein, and threatened to “smear” him if he continued reporting on Weinstein, even after he left the network.

New York Times’ John Koblin writes that Farrow’s investigation into sexual assault and rape allegations against the legendary Hollywood producer was blocked by “the very highest levels of NBC.”

“Three days before Ronan and I were going to head to L.A. to interview a woman with a credible rape allegation against Harvey Weinstein, I was ordered to stop, not to interview this woman,” McHugh told NYT. “And to stand down on the story altogether.”

NBC News has pushed back against McHugh, and deny his characterization of what happened. The network maintains its long-held stance that Farrow’s story was not ready to go to air when he brought it to NBC brass in July 2017.

“We repeatedly made clear to Ronan and Rich McHugh the standard for publication is we needed at least one credible on-the-record victim or witness of misconduct,” NBC News president Noah Oppenheim told the Times. He added: “And we never met that threshold while Ronan was reporting for us.”

Sources told TVNewser last October that Farrow and his team had a 6,000-word draft article and a 3-minute script for a TV news story in July 2017, but, after much back and forth, with NBCU’s legal team involved, NBC News determined there wasn’t enough to air the story.

Farrow, a nonexclusive contributor to NBC News at the time, was then given the green light to take his reporting elsewhere, and “elsewhere” was eventually The New Yorker.

When Farrow won a Pulitzer earlier this year for his series of New Yorker stories about Weinstein, McHugh was one of the people he thanked:

And a special thanks must go to @RichMcHughNBC, who defied orders and put everything on the line to keep reporting and ensure the evidence saw the light of day. I would have been lost without him.

The Daily Beast‘s story that was also published tonight cites sources who say NBC threatened to “smear” Farrow if he continued to report on the Weinstein saga, even after he left the network.

The story claims there were alleged threats from NBC, and “back-biting inside the network about who was truly responsible, and a previously unreported ultimatum by Weinstein’s attorneys.”

NBC News general counsel Susan Weiner, according to The Daily Beast, “made a series of phone calls to Farrow, threatening to smear him if he continued to report on Weinstein.”

“This is a ridiculous claim by all measures,” an NBC News spokesperson told The Daily Beast. “Susan is a person of tremendous integrity and character and would never threaten anyone.”

The Daily Beast also reported that during a meeting last summer, Oppenheim mentioned to Farrow that Weinstein had raised objections to Farrow’s reporting—”even though Farrow had not yet asked Weinstein to comment on the allegations, according to individuals briefed on the meeting.”

At least one reporter is backing up McHugh and Farrow:

I worked in the @NBCNews Investigative Unit in the fall of 2016. @RichMcHughNBC and @RonanFarrow are telling the truth. @NBCNews executives are not. Ronan Farrow’s Ex-Producer Says NBC Impeded Weinstein Reporting https://t.co/WgtDHeMOzJ

An NBC News spokesperson provided TVNewser with the following statement on Thursday night:

The assertion that NBC News tried to kill the Weinstein story while Ronan Farrow was at NBC News, or even more ludicrously, after he left NBC News, is an outright lie.

In August of 2017, after NBC News assigned Ronan Farrow to investigate Weinstein and supported his reporting efforts for eight months, Farrow believed his reporting was ready for air. NBC disagreed because, unfortunately, he did not yet have a single victim of — or witness to — misconduct by Weinstein who was willing to be identified. Dissatisfied with that decision, Farrow chose to leave for a print outlet that he said was willing to publish immediately.  NBC News told him “we will not stand in your way,” and allowed him to take his reporting to The New Yorker, where, two months later, he published a strong piece that cited the following victims by name: Asia Argento, Mira Sorvino, Rosanna Arquette, Lucia Evans, Emma de Canes, Jessica Barth, and Sophie Dix. Not one of these seven women was included in the reporting Farrow presented while at NBC News.

Update: An NBC News spokesperson provided TVNewser with the below statement on Friday afternoon:

Susan Weiner has been a champion of journalists and defender of the First Amendment in newsrooms for over thirty years. The anonymous and untrue attack against her is just one of the many falsehoods circulating around this story. Weiner never made any threats against Ronan Farrow. Weeks after Farrow left NBC News and went to work for The New Yorker, Weiner spoke to him one time for one specific reason – because the NBC legal department continued to field inquiries about Farrow’s outreach to sources. Weiner reminded Farrow that as he continued his reporting on behalf of a separate news organization he should no longer represent himself as working on behalf of NBC News. She made no threats and the characterization of that conversation in The Daily Beast is a malicious distortion.