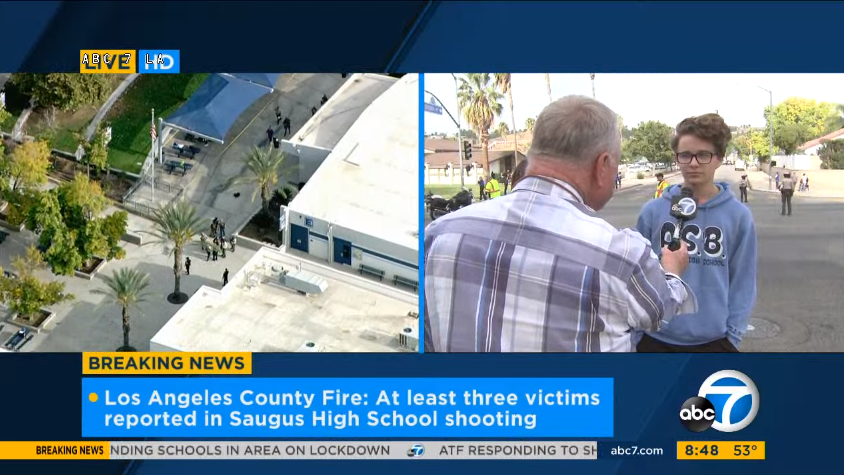 LA Sheriffs department says a second student has died: one of the 14-year-old males. https://t.co/dLXrwIiqmG

Muir: “These are the pictures that have become all too common in this country. The evacuations afterward and the students being taken away from the school.”

ABC News chief justice correspondent Pierre Thomas reported:  “One of the things that struck me about conversations with some of the sources this morning. They were discussing how common place this is becoming. The notion of people showing up in public places and shooting people. In just this year alone, we had the situation at the Walmart in El Paso, Texas. We had the situation at the bar in Dayton, Ohio. Virginia Beach, a public government building shooting. Another situation where at San Diego Synagogue. A situation where in Odessa, Texas, a man driving around shooting people on the highway. So they know this is a phenomenon. You’re seeing a massive response today because authorities – state, federal and local – are working together to respond quickly to these situations.”

ABC News correspondent Alex Stone: “I was talking to a parent who said he was getting phone calls and texts from his son inside…. he saw the shooter pull out a gun. He was so close that his ears were ringing afterwards. They have since been locked down inside a classroom with a firefighter. He and seven other students are waiting for the Sheriff’s department to come in and say that they can come out.”

A shooting at Saugus High School in Santa Clarita, Calif., was reported today at 8 a.m. PST, and according to the Los Angeles County Fire Department, there are at least 7 victims.

The suspect has been described as a 15 year old male of Asian descent wearing black clothing. He reportedly “fled the scene” after the shooting took place.

One male student, a Sophomore at Saugus High, told ABC 7 (KABC-TV) that he was walking to school when all of a sudden he received a text from a couple friends to not go inside because they heard shots fired.

“At first, I didn’t believe it. I just thought maybe a generator blew up or something. You would never think this would happen,” said the student. “Then, I saw cops and I stopped and called my mom. She told me to come straight home and so I did.”

The student’s mother, who was also present for the interview, added that the school has done multiple shooter drills this year. “I hate that this is the new normal, but I can see why now,” she said.

We’ll update this item as more info rolls in.

We believe at this time that there is only one suspect but we are actively investigating and following all leads.

This is still a very active situation. Reports of approximately 5 victims being treated. Parents, deputies are on scene everywhere protecting your children.